AliceSoftWiki
Register
Don't have an account?
Sign In
Advertisement
in: Articles with No Spoilers, Characters, Races,
and 2 more

Hanny is one of the staple creature of Alice Soft's fantasy world. When referring to the species as a whole, the term Haniwa (ハニワ) is used, similar to how Humanity is used for humans.

They resemble short vertical cylinders with a round top, three big holes for eyes and mouth, and two small round stumps on the sides (on the level of the mouth) for hands. There is no discernible lower body or legs, most of them move around by hopping, though a few of the species may be capable of levitation. They don't have a distinct smell, different people have said they smell of grass, burnt food, potatoes or clay. Female Hannies are called Haniko (ハニ子). Haniko are pink and wear a bow. All Haniwa eat a staple diet of rice and when they are hurt, they cry "A-i-ya~". When alive, they have a strange texture between hard and soft, but after they die their dead bodies turn into a ceramic material that can shatter with ease. Haniwa are actually delicious creatures, but they're incredibly hard to eat since they can only be eaten alive. In the world of Evenicle, Haniwa shards are the most important ingredient in Haniwa pasta. However, since the deliciousness of the dish leans heavily on the size of the shard, and hannies who die violent deaths leave behind shards that are too small, acquiring a suitable shard is very difficult.

They live all over the world and boast large variations of size, shape and nature. The top dog of the Haniwa species is the Hanny King, he formed their unified society and culture and is universally respected by all hannies to the point of having his own faithful religion. While some Haniwa believe in the preachings of the AL Church, most Hannies join the Haniwa Temple to worship their King.

Some hannies are perfectly capable of living in society with other races like humans, and lots of Haniwa go into the business world and provide the continent with many goods. It's perfectly normal and commonly accepted to see Hannies owning shops, taverns or other facilities, and in fact, all the coins in circulation are manufactured by Haniwa, from broken golden Hannies, prompting Rance to call their power "terrifying". Despite this how welcome their prescence is varies depending on the place. They're despised in the Magic Kingdom of Zeth due to their immunity to magic, leading to them suffering from persecution and isolation in the Haniwa Plain. To protect his species, the Hanny King established in the Haniwa Plain a small settlement called the Haniwa Village, where many persecuted Hannies from everywhere can live in peace.

They're full of vitality, and while many co-exist with other races, feral Haniwa do not have a social life(?) and they don't even get along with other monsters. These hannies are often seen in locations devoid of civilization, like dungeons or caves, and they attack humans on sight, making them comparable to regular monsters.

In the games, Hannies are almost uniquely portrayed as clowns subject to the ridicule and cruel treatment of the protagonists or other characters. Some consider such treatment a bit discriminatory, unjust and problematic, since they are also creatures with souls and are actually highly intelligent. Kalars are also subject to similar prejudice, although to a much lesser degree. Under such circumstances, some Hannies campaign for equal rights for Haniwa comparable to those enjoyed by the humanity. However, typical Hannies are usually extremely silly or wacky, and often with weird fetishes, making prejudices against them somewhat justified.

When a Hanny and a Haniko are comfortable in their relationship and want a child, they make a journey on foot(?) to the Great Furnace. Once there they take clay from one another, heat it up, and form their child together. Doing such a thing is considered the ultimate symbol of love for the Haniwa. They also see it as a sacred ritual and they're thrown in a blinding rage if they're observed by others during the intimate act.

Hannies are usually wrongly believed to be a very weak race, but this is far from true. Just like humans, the strength of Hannies vary a lot depending on the individual potential of each Hanny, and they need to go through training and experience in the battlefield to become powerful fighters.

The most notorious abilities of the Haniwa are their unique skill, the Hanny Flash, and their Absolute Magic Resistance. These two abilities are inherent in all the Hannies from the moment they are born, with no exceptions. The Hanny Flash is a fast magical attack capable of ignoring the enemy's defenses, while the Absolute Magical Resistance makes Hannies completely immune to all magical attacks, no matter how powerful. These abilities make Hannies naturally decent fighters and the average Hanny is actually stronger than the average human thanks to these. However, their physical strength, endurance, speed or magic power still highly depends on the training and potential of each Hanny. An average Hanny that hasn't gone through any proper training willl look like a joke to an adventurer that is used to fighting monsters. They usually fight by using their iconic Hanny Flash, and wielding a Trident to stab their opponents.

There are many different types of Hannies that make it easier to determine the potential they possess for battle, going from extremely weak creatures not stronger than a Squidman, to absurdly powerful entities that could rival with the most powerful creatures in the world. Feral S Hannies are noted for being among the strongest monsters in the world, and some consider the Hanny King, leader and most powerful member of the race, the most powerful living being in The Continent after the Demon King, although there are certain other creatures that can match its strength, like the abnormal Urunsel.

Sometimes Haniwa can be modified in other strange ways or through birth defects, this is a list of mutated Haniwa subspecies.

Lots of Haniwa go into the business world, and provide the continent and JAPAN with many goods.

Golden Haniwa are ancient constructs that end up disturbed by adventurers and ultimately destroyed, then they're carried back to the Hanny Mint for processing and turned into GOLD.

They're not intelligent or rational, so there are no qualms about recycling them into currency.

They are huge in size, much bigger than regular Hannies or humans are, being similar to buildings like towers in height. Their true origin is unknown but they were presumed to be created along with the world in the distant past as a natural form of nature.

Their golden colour is considered beautiful and majestic, excellent for making jewelry or high-class finery as well.

The first Hanny in Little Princess 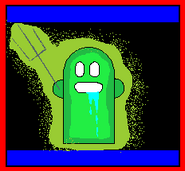 A Green Hanny in the original Rance I.

A Blue Hanny in the original Rance I.

A Hanny in the original Rance III. 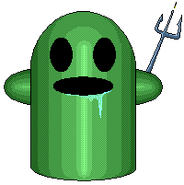 A Hanny in Toushin Toshi 1.

A Hanny in Toushin Toshi 2.

A Hanny in Rance IV.

A Hanny in Rance VI. 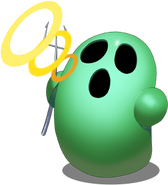 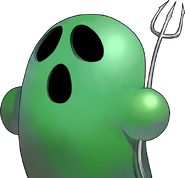 A Hanny in Rance IX. 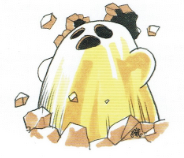