Ham Bambaras are a race of Guy Monsters that look like hybrids between human males and pigs, which is why some people refer to them as "Pigmen".

They were born from the Holy Gal Monster, Bezeleye. Many years ago, a power hungry scientist called Professor Bambara, managed to capture Bezeleye and forced her to copulate withInsects that resemble a lot to real-life Pigs, breeding with these insects, she gave birth to these pigmen that the Professor named after himself as monster servants. It is unknown what hapenned with the scientist or with Bezeleye, but the Bambara became one of the many races of Guy Monsters that poblate The Continent.

Bambaras are very rude and nasty monsters. They don't attack humans instantly without a reason, but they are very selfish and can quickly pick a fight if provoked even the slightest. They are usually very gross and with repulsive behaviours. It's worth to note that not all Bambaras are like this, some are pretty friendly or even cortious, but this is not the case for the vast majority of them.

They are pretty average as monsters, but they vary in strength pretty wildly. Some can get really strong and they becomes leaders of their groups. Their battling style is very similar. While they are easily stronger than the average human, they prefer to take up arms and wield weaponry like spears, swords and shields for combat, which is a pretty rare trait for monsters. They like killing, stealing and raping for fun, like human thieves do. The average height and weight of the regular bambara are 163cm and 98kg respectively.

There are other types of Bambara that are stronger and smarter than usual, but the most powerful and rare of all are the Elephants Bambara, a rare type that resemble real-life elephants rather than pigs. They are a lot bigger and muscular, considered the most powerful of Bambara.

In the world of Evenicle, Bambara-type monsters were created by an unknown researcher, who studied notes that supposedly came from another world (possibly The Continent). While the Bambaras have gone on to become a standard species of Guy Monsters, there have been fears of them mutating further, but so far this has been proven unfounded. 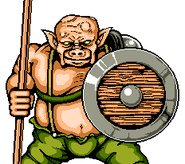 Bambara in battle in Toushin Toshi 1.

Bambara in battle in Toushin Toshi 2. 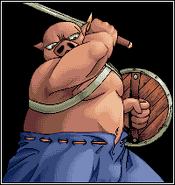 Bambara in battle in Rance IV.

A Ham Bambara in battle in Persiom.