AliceSoftWiki
Register
Don't have an account?
Sign In
Advertisement
in: Articles with No Spoilers, Articles needing a Quote, Characters,
and 4 more

Haini Gold is a member of the Keith Guild and the personal secretary of Keith Gold. She boasts a short and tidy red hair and wears glasses with a green office suit. She's quite a pretty woman, Rance has stated his liking for her, but miraculously, he hasn't tried to have sex with her. This is probably due to her close relationship with her boss Keith, to who Rance has a deep respect he won't ever acknowledge aloud.

She appears in Rance 03 with Keith as a new secretary he hired. He is very laid-back and comfortable with her, although she seems pretty embarrassed over the way he carelessly is with her in public.

Two years later in LP0004 the two seemed to have fallen in love with each other and married at some point, though it wasn't revealed until Rance Quest. When Rance figures it out, Keith mentions that she's also pregnant and wasn't working with Keith at that time for this reason. Keith is very happy with this and notes about how great it is to have a loving wife and form a family.

Haini with Keith Gold in Rance 03. 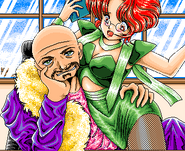 Haini in the original Rance III. 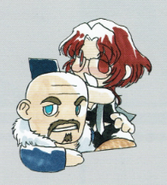