Gumo Danjou was a former commander of Oda House whose corrupt actions led to the Ninja nation of Iga House declaring its independence. He serves as a minor antagonist in Sengoku Rance.

Prior to the events of Sengoku Rance, Danjou served as a commander of Oda in charge of presiding over the Iga Clan, a group of ninja who served the Oda family. He was notorious for his cruelty, and treated the ninja of Iga as little more than expendable tools, frequently throwing them to their deaths without a second thought. For some reason, his horrible actions towards the ninja went unnoticed by the Oda family, and he was allowed to oppress and abuse them without any danger of losing his position for several years.

Following the disappearance of Gekkou, the then-leader of Iga, during the Great Youkai War in the year GI1012, the ninja Inukai was appointed the new head of the clan. Outraged by Danjou's cruelty and lacking Gekkou's devotion to his lord, Inukai led a revolt against Oda House and declared Iga to be its own nation. Danjou's actions were finally brought to the Oda family's attention and he was promptly fired from his position and narrowly avoided execution by escaping to parts unknown. Throughout his reign as Ninja King, Inukai vowed to one day kill Danjou and avenge all of the ninja who died due to his cruelty.

If Inukai is recruited into Oda House during Sengoku Rance, he will eventually gather intel on Danjou's whereabouts, where it is revealed that he has been serving as a commander for an enemy nation. Should Inukai be fielded against Danjou in battle, a scene will occur afterwards where he successfully traps and kills him. Later on, however, Inukai learns that the Gumo Danjou he killed was likely a decoy, as a group known as the Silver Eye Sect had emerged with Danjou at its helm. As soon as Inukai begins preparing to destroy the organization and avenge his clan, Suzume bursts onto the scene carrying Danjou's severed head in a box. Suzume reveals that she happened to run into Danjou while out bass fishing and decided to kill him as a present for Inukai, ending his cruelty for good. Despite his lifelong enemy finally dying, Inukai is left in stunned disbelief that Suzume accomplished in an instant what he could not for years.

Following Danjou's death, his trusted subordinate Kakusui took control over the remnants of the Silver Eye Sect and vowed to avenge him by killing Suzume and Inukai, leading to the events of Three for the Slash! Thrust! Burn!.

While Gumo Danjou had no unique appearance, he used the face given to "rough" generic commanders, making him appear to be a wild-looking middle-aged man with a sadistic grin on his face.

Gumo Danjou was shown to be a highly cruel and ambitious man who thought only of himself. While serving under Oda, he threw away the lives of countless ninja in order to gain more victories for himself and improve his standing within the nation, and later formed an independent organization of his own in an attempt to conquer all of JAPAN for himself. He held no empathy for other people, and easily moved from one group to another whenever the opportunity to obtain more power arose.

In addition to his cruelty, Danjou was also very cowardly, fleeing for his life whenever trouble arose and relying on decoys to avoid having to directly confront his foes, further painting him as a despicable person.

While very little is known about his capabilities, Gumo Danjou's ability to achieve a high standing in the armies of Oda and at least one other rival nation suggests that he possessed a decent amount of talent as a military leader. While he himself is never encountered in battle, the double that participates in battle for him notably knows the skill Ninja Snipe, which deals increased damage against ninja units, suggesting that Danjou either specialized in fighting ninja or that he specifically hired a double that was talented at fighting ninja in hopes that they would be able ward off any attacks from Iga. Despite these strengths, both Danjou and his double fell easily when pitted against Inukai and Suzume, suggesting that neither was particularly outstanding as a fighter.

Danjou also seemed to have been rather cunning, being able to perform heinous acts as a commander without alerting the attention of the Oda Family as well as evading Inukai's relentless pursuit of him for several years. This is further supported by both his use of a body double to divert attention away from himself and his formation of a sizable army that was completely devoted to him in a short amount of time, suggesting that he was quite charismatic. 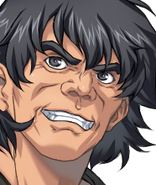