The Great Maou, also known as the Archfriend, meaning Great Demon King, is a high-level type of monster greatly feared and famous by common people.

In appearance, he looks like a huge pink rounded creature that somewhat resembles a cat, due to his face and ears. He has devil-like wings and a black cape like that of an evil overlord, and wields a scythe in combat.

He's a powerful monster, pretty rare, and that is usually found deep within dungeons sometimes acting as a Boss to other weaker monsters. The reason why they are so feared is because they are often mistaken with the Demon King of The Continent, possibly from his name, which comes from the meows he utters that resemble a cat's (Mi ah ou). In MangaGamer translations, where the Demon King is called the Archfiend, the Great Maou is known as the Archfriend.

While he's a powerful monster that would require a party of high level'd adventurers to take down, he's not even remotely close to the might of the Demon King, but the common confusion brought by his name make people fear his prescence and sometimes overpaid missions are made by oblivious townsfolk to take these down. 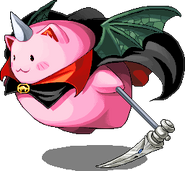