The Goldfish Tamer is a unique Gal Monster that specializes in training and using Goldfish Insects for combat. Goldfish Tamers tend to have a blue long hair and wear a tight bandana with a cape. There is a stronger and much deadlier version of these called Demekin Tamer.

She commands them with a whistle and uses them to attack her enemies, since she herself holds no combat potential. Due to this, she's worthless if for whatever reason she doesn't have any Goldfish with her and she can't tame any other creature. If they are defeated before their Goldfish, it is common that her Goldfish turn against her and start licking her all over her body.

Her height and weight are 166cm. and 50kg. respectively. 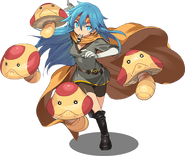 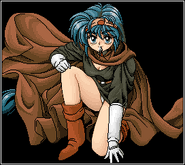 A Goldfish Tamer in battle in Dungeons & Dolls.

A male Goldfish Tamer from the Ouji-sama game series.