Genri is a rugged monk of the Tenshi Sect who has crossed paths with Rance multiple times. He is notorious for possessing a massive penis.

He first encountered Rance during the events of Rance 4.1, where he was one of several mercenaries hired by Happiness Pharmaceuticals to investigate the strange monster-filled tunnel that had appeared beneath its factory. He quickly proved himself to be a competent rival to Rance, as he had no problem defeating the monsters infesting the tunnel and succeeded in seducing the receptionist that Rance was targeting. Despite this, he continuously provided Rance with helpful advice to solve the cavern's many puzzles throughout the game. When the Happiness Pharmaceuticals building was raided by the Angel Army at the end of the game, Genri teamed up with Rance to defeat them.

During his time working alongside Rance during Rance 4.2, Genri revealed that he had an ulterior motive for taking the job besides the reward money. His older brother Houri had run away from their temple and Genri was tasked with finding him. Rance completely ignored this information and spent the majority of their time together physically abusing him and not allowing him to have any of the women they encountered. At the end of the game, it was revealed that Genri's brother was in fact Archibald, the leader of the Angel Army. After Archibald's defeat, Genri quickly shaved his brother's head, thanked Rance for his help and returned to JAPAN.

He is briefly mentioned by Sill Plain during the events of Rance 5D while investigating the shrine in Genbu Castle, where she compares it to a temple that he would serve in. Rance expresses confusion about how Sill knew who he was, but quickly forgets about it.

He reappeared in Sengoku Rance serving under the Tenshi Sect. Once Rance assumed control over Oda House, Genri was tasked by Seigan, the head monk of the Sect, to persuade Rance to refrain from conquering the rest of JAPAN in order to avoid unsealing the Dark Lord Xavier, hoping that his past with Rance would make him more willing to listen. Aware of Rance's character, Genri knew that the task was hopeless but attempted to do so anyway out of loyalty, where he was predictably refused. Following this, Genri seems to have assumed a high position within the Tenshi Sect, working directly alongside Seigan in his efforts to prepare for the upcoming battle with monsters. Following the attack on Honnouji Temple, Genri travelled into the mountains with Seigan to further train their abilities. He can potentially join Oda House sometime after this, much to Rance's dismay.

Genri is a muscular man with a scruffy, unshaven appearance. As a monk of the Tenshi Sect, his head is shaved, revealing a distinct scar across his scalp, and he wears standard Tenshi robes. Despite his appearance, he is actually quite young, and is only two years older than Rance.

He is a very laid back and easygoing person who doesn't let himself get dragged down by the problems of his life. He enjoys having a good time above all else, and will frequently make jokes to lighten the mood of a situation. He is generally very friendly and polite to others, and his relaxed nature causes him to be a reassuring presence to his allies. He is perfectly capable of understanding the gravity of a situation, however, and takes his duties as a monk very seriously, making him a surprisingly diligent worker.

His hobbies embody the primary vices of an ordinary monk, as he enjoys drinking and women above all else. Similarly to Rance, he attempts to sleep with every woman he encounters on his travels. While he is not seen as particularly attractive, his charming personality gives him a fairly high success rate. He is very good in bed, possessing both exceptional technique and a very large penis that ensure that sex is always a pleasurable experience for his partner.

While Rance was initially indifferent to Genri, he became extremely angered by him after discovering him having sex with the woman he was pursuing and seeing his massive penis. Rance is made deeply insecure about his own Hyper Weapon when thinking about the size of Genri's member, and will frequently angrily yell that it is "too big" and "ruins women". During their time working to defeat the Angel Army together, Rance was very rude to Genri, repeatedly attacking him and refusing to let him have any of the women they encountered. Despite this, Genri remains very friendly to Rance, considering him to be an interesting person, and is grateful for his help in finding his brother, though he is fully aware of the fact that Rance dislikes him. Rance seems to soften his view of Genri during Sengoku Rance, as the two eventually make a game out of seeing who can sleep with more women within a day.

Genri is a skilled practitioner of Tenshiism, allowing him to use several incantations in combat to perform actions such as protecting his allies or advancing time. His talent as a monk is apparently very unusual, as he is noted to have an almost absurd amount of Tenshi power, particularly for someone who regularly goes against its teachings. During the events of Sengoku Rance, he trained alongside Seigan in preparation for the battle with Xavier, increasing his skills even further. In addition to his magic power, Genri is also a skilled martial artist due to his training as a monk. He uses a large staff in battle, and his muscular frame allows him to wield it to great effect.

He possesses an above average Level Cap of 30, giving him a decent amount of potential. While this cap is fairly low when compared to other skilled warriors, his skill as a monk generally allows him to be substantially stronger than his cap would otherwise suggest. 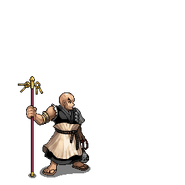