AliceSoftWiki
Register
Don't have an account?
Sign In
Advertisement
in: Articles with Minor Spoilers, Characters, Male characters,
and 7 more

Madou (魔導) is one of Xavier's five apostles, but his true name is Genbu (玄武). He is sealed within Kobayakawa Chinu. It is implied that he has some kind of connection to Shinobu. He's also the owner of the Genbu Castle.

He's a large faced priest-type man, he appears alongside Xavier when the Demon Army is formed in JAPAN. Generally, he doesn't fight himself, he just observes and manages the troops. He strategizes with Xavier, proposing multiple ways on how to destroy the JAPANese.

He stutters over his words, and appears to not like violence, only killing people when he claims he is helping them or when he has no choice.

His true form, Genbu, appears to be an elephant-like creature with the top of his body covered in stone, and his trunk being a snake.

His most notable feat is his creation Genbu Castle, an interdenominational space where the normal laws of physics don't apply. He appears to have made the pocket dimension to house his beloved Waka, who he trapped in a doll.

He was eventually killed by Rance and his forces in South Africa, JAPAN. He tried stopping Rance from getting near the Soul Binder and Kurohime, but got defeated in his Madou form and his Genbu form. 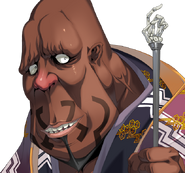 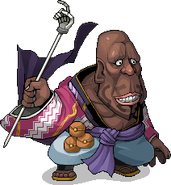