Gekkou was a legendary ninja who served under the previous Oda Nobunaga and died during the Great Youkai War. He found Shinobu as a baby on the battlefield and has loved her more than anything else in the world ever since, to the point of cutting his own left arm off so that they could never be apart on the battlefield. Ultimately, he blew himself and Shinobu up after she sustained critical injuries during the Youkai war, killing them both.

In Sengoku Rance, it is possible to recruit him in a second play through, where it is revealed that he and Shinobu were struck by a bolt of lightning before their fatal explosion, sending the two into the future where they promptly serve the current Oda Nobunaga. If he is the only unit deployed into battle after getting character cleared, he will blow himself and Shinobu up to instantly win the battle, mirroring their previous sacrifice and killing the two off for good. Gekko must be character cleared for this to happen. His appearance in Sengoku Rance is considered non-canon and his death with Shinobu during the Youkai War is considered his canonical death.

The current Ninja King Inukai served under Gekkou when he was a rookie ninja, where he referred to him as "boss". Inukai still fears Gekkou's harsh training to this day to the point where he'll surrender to Oda immediately after finding out that Gekkou is with them.

If Omachi is recruited, he will attempt to avenge his former lord by assassinating her, but changes his mind after seeing that she truly did change her ways. This appearance is entirely non-canon and has no bearing on the current timeline. 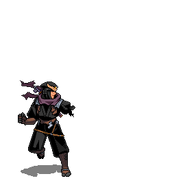