Geimark was a man that served as The Continent's Guardian Hero of the World during the years of the RA Era. He was the main player behind the catastrophic event that took place in the year RA4 and became known as "The Hero Calamity". In a desperate attempt to defeat Demon King Rance he along with his followers launched a killing spree against humanity in order to increase human mortality enough to reach a level where the Sword of Heroes Escudo could grant him the power to defeat the Demon King. His onslaught proved destructive enough that the world leaders of the continent attempted to fight against his group but even that proved futile and eventually 30% of humanity were killed by him and his men. In an ironic twist, his rampage was stopped by none other than Demon King Rance himself, who had overheard of his indiscriminate mass killings.

While he was presumed dead, three years later Geimark returned and climbed Rising Dragon Mountain once again in an attempt to exterminate the Demon King, but he was yet again defeated and his body was horribly mangled as a result. This time the world was convinced of his death but despite the fact that no human should be able to survive with a body in such state, rumors of him still roaming near Dragon Mountain began to emerge. Many didn't believe this rumors but the tale of Geimark became a well-known ghost story among the population. In reality Geimark was indeed kept alive thanks to the machinations of the Hero System, which prevent the Hero to ever die for as long as he's the Hero. While his status as a hero usually would have been lost upon turning 20 years old, the special circumstances the world was at where it was abandoned by the Gods, prevented him from losing his powers as a hero. His conciousness still remains to some extent but he's in a state of constant pain and suffering, wandering aimlessly near the Demon King's domains.

During the events of Rance X: Part 2, he's first encountered during the early period of El's adventure when his then still small party, convinced by Nagata-kun's reckless advice, set foot into Dragon Mountain. The group encountered Geimark roaming around the area, as well as the Hero's guide Cola, who explained Geimark's circumstances. Merely terrified, they simply left him behind and continued advancing on their mission.

Much later when the El Party was fully assembled with all of the Demon King's Children, the group encountered Geimark once again near the entrance of the road leading to Amazing Castle. After Rangi explained his story to the group, Zance suggested to get rid of him just in case, as he could prove troublesome for them later on, attacking the agonizing Hero on the spot. Once Geimark was defeated by the party, he began begging to be killed, much to the shock of everyone present as they didn't expect him to be able to talk. While whether he deserved his current fate or not was put into question, if El shows compassion for the tormented Hero, Geimark is able to finally die right after.

A horrifying figure, Geimark is at first sight mistaken for an Undead, having a horribly deformed body that more closely resembles that of a rotten corpse than that of a living human being. His skin was melted, his eyes and face destroyed, as well as receiving numerous grievous wounds like a hole in his belly and a mangled left hand. His brain functions were seemingly lost as well, being barely capable of hearing or seeing. According to Cola, he's constantly in a sharp pain, with his whole body crumbling and itching.

Not much is known about Geimark's personality but he was a man willing to do anything in order to fulfill his goal, going as far as exterminating millions of innocents in order to gain the power to slain the Demon King. It seems that he had a strong fixation against Rance, possibly despising him due to his actions as the head of the Antagonist Race. He was determined, being willing to fight the Demon King again even after having faced a brutal defeat once. As he was able to convince a large group of people to assist him in his fight against Demon King Rance, he was presumably charismatic as well as charming to the opposite sex thanks to the natural traits of the Hero System.

In his current state much of his original personality has been consumed by the vortex of despair that plagues his continuous existence. With a lot of effort he's capable of barely communicating, but he only begs to be killed so that his suffering may end. He attacks those that get too close purely as an instinctive response however, and is likely mostly unable to understand what others say or do.

In his prime, Geimark was en extraordinarily powerful individual displaying the powers of the Hero System. A high level cap, Lv2 skills in Swordplay and Spear combat and the natural powers of the hero made of him a formidable foe that few could stand against. The strength of the group he commanded was so high even with the combined effort of the 4 big countries of the continent he couldn't be put down, being Demon King Rance the only one that finally managed to track him down and put an end to his rampage. While his current state severely reduced his fighting performance, he still inherently retains some of his former strength. He attacks anyone that gets nearby with a shocking strength and speed, though not much accuracy. He was also capable of fighting against El's Party in an encounter, and while he didn't amount to much, being able to stand on his own with pure instincts showcase that his body still retains his former abilities to some extent. 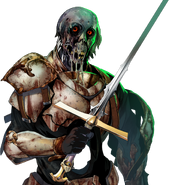