Gates are a species of Guy Monsters noted for their geeky appearance and personalities. These strange monsters love technology, or more specifically, technology related to informatics. They all have cloaks, freckles, wear glasses and have long, prominent noses, giving them a rather nerdy appearance.

They all carry a computer with them everywhere, which they use for many different personal hobbies of their own. They are somewhat goofy, graceless and clumsy, but still very intelligent creatures with an amazing ability to develop and evolve over time. Their minds have an incredible potential for processing information and learning over time allows them to implement more sophisticated devices and programs in their computers, improving their own potential and power. Each stage on this evolutionary process is called "version". With each version, the ability of Gates increases exponentially, and their clothes gradually become more flashy and flamboyant over time. The versions are initially represented by numbers and then through a series of letters, and Gates have their version printed on their shirts, making them easily recognizable.

Thanks to their gifted minds, computers have been created by using the Brain Tissue of these monsters as CPUs. The higher their level, the more potent the computer is and can do faster and more complicated calculations, allowing scientists to make quicker technological advancements with more efficiency.

Gates 94
One of the weakest versions. Their brain tissues are used to create most computers of the Happiness Pharmaceutical Company, since they make the cheapest PCs.
Gates 95
The most commonly seen version.
Gates 98
A more advanced version with more beautiful clothes.
Gates ME
A powerful but unstable class of Gates.
Gates XP
A very rare and high level Gates. Their Brain Tissue has an incredibly high performance. The computer of Chizuko Yamada has a CPU made from one of these.
Gates Seven
The highest version seen up to date. Appears in Rance Quest. 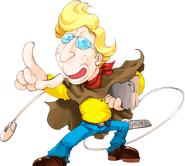