Gal Monsters appear in several Alicesoft games, making a cute and sexy addition to the enemies you can battle. There are dozens of types, the most well-known likely being the bunny-girl Kyankyan. In many of the games, most of the Gal Monsters you encounter can be captured, either for the main character to H or to sell for money.

Though the literal translation would be "Girl Monster", the term "gal monster" comes from the name of AliceSoft's game GalZoo Island, which focuses on them. Gal Monsters were created along with the Third Protagonist Race, Humans, to serve as the female counterpart to Guy Monsters. They were both created to breed with each other, so as to allow for the species of monsters to proliferate; but most of the Gal Monster look more like young girls than monsters.

Not only are they cute and attractive (with a few exceptions), but many of them have powers far beyond ordinary human beings. Some Gal Monsters live for a very long time, but most only live 7-10 years. However, they retain their girlish figure until the day they die. This was done this way so that they would be able to give birth to new monsters for as long as they live.

While their faces might all look the same to you, it's the same as if you were to look at, say, a group of foreign people whose faces you aren't used to discerning; they all might look indistinguishable to you, but to each other, they look perfectly distinguishable. Nevertheless, humans can easily distinguish between species of monster girls, not only by observing unique features, but by their clothing. Contrary to popular belief, Gal Monster clothing is actually a part of their body, almost like a shell or feathers would be to an animal. It is possible for a Gal Monster to remove or even change her clothing, but they are very reluctant to do so. Because of this, they even bathe in their clothes. Rare types of Gal Monsters have been observed with alternate outfits.

Gal Monsters tend to group together in secluded areas, hiding in forests, caves, and mountains. Humans often like to search for them, and their prying eyes are like a ceaseless assault on their little communities. Because of this, Gal Monsters are typically afraid of Humans. And with good reason; many humans have a hobby of hunting or "collecting" Gal Monsters, even going so far as to capture them and sell them to special shops for measly payments of Gold. Conversely, a team called the Angel Army is a well-known international Gal Monster protection agency, dedicated to the protection of Gal Monsters and fighting for their rights.

After being impregnated by a Guy Monster, the Gal Monster will lay an egg after a few weeks. Because their eggs are often targeted for their deliciousness, Gal Monsters typically lay at least two and as much as eight eggs at once. After about a year after hatching, they grow into an adult.

The type of Gal Monster that hatches is determined by its parents. Its Level Cap and other attributes are also hereditary. In some special cases, unique traits can come about as a result of breeding. The mother of the Gal Monster almost always raises her single-handedly, but some are abandoned.

When Rance was asked "Do you like Gal Monsters?", he replied:

"Since they're kind of hit-and-miss, I'm not gonna say anything."

And this is true; Gal Monsters are incredibly diverse, and while most are attractive and sexy, many are not, and some might simply be un-erotic to certain people. Nevertheless, it is very common for Humans to have sex with Gal Monsters, even though it's seen as a taboo, and even by some as an act against God, decency, or whatever stands for Good in their mind. A sexual experience with a Gal Monster is usually about the same as with a human, but there might be small differences or nuances depending on the species (for example, a Frozen might feel good on a hot summer's day).

Capture and Trading of Gal Monsters[]

Because of their attractive and diverse appearances Gal Monsters are often hunted and traded among humans, typically to be used as sex slaves that satisfy unusual fetishes. Depending on certain factors like rarity, demand and the strength of the Gal Monsters, they can be sold for higher amounts of GOLD, and they're a precious soil for those immoral enough to sell them to "Char Shops", establishments designed for the trading of different species of Gal Monsters. It is not too uncommon for Adventurers to become Gal Monster Hunters as well, as they're a great way of making money and they can easily encounter many species during their missions. In order to capture Gal Monsters, hunters utilize special magic items called "Capture Ropes" that immediately wrap around a Gal Monster and restrain their movements. However these ropes only work in Gal Monsters that have been severely weakened after battle, forcing Hunters to be extremely cautious since if they overextend they could potentially kill their target by accident. Particularly skilled hunters might be able to capture without using ropes but this requires a higher level of experience and technique.

After captured Gal Monsters may have various uses. The most common is merely as sex slaves, as unique Gal Monsters can provide with particularly special and exclusive sexual experiences. Because Gal Monsters can potentially die from coming into contact with large amounts of human semen, certain potions exist that prevent this lethal poisoning, which are usually used by trainers and tamers so that they can have intercourse with them without fearing repercussions. Monster Tamers capture Gal Monsters and train them to become their partners, and they assist them in their daily life and in battle as companions. Instead of relying on torturous sexual training like Sex Slave Trainers do when turning them into obedient sex slaves, Tamers develop relationships with their Gal Monsters, though they often sleep with them as well.

Gal Monsters of this type are said to be one-of-a-kind. There's only so much room on the continent, and even with the massive amount of monsters and Gal Monsters born daily, these species have defied the odds to a legendary extent, and proven to be super-rare. There's only one of each Rare Gal Monster in the world, and those of this type won't be able to be born again.

Some examples include Revenge-chan, Gold Dragon, and Crayon.

A step far above any mortal Gal Monster, these beings are the patron Gods of Gal Monsters. They look like little girls.

Together With A Puppet

A portrait of a Kyankyan from Rance 5D.

A Magician raising its staff to attack. 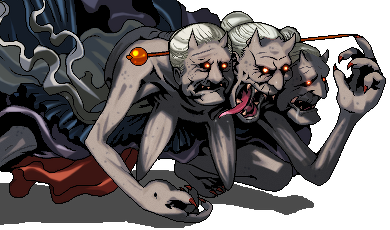 Surprisingly enough, the Onibaba is a Gal Monster. 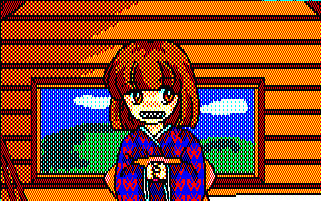