Gaji Gijiku is a samurai, formerly loyal to the royal family of JAPAN, and more specifically, the Princess Shizuku Koboyakawa. One of the greatest warriors of the land, armed with a massive katana dubbed "Monohoshi," Gaji served as Shizuku's bodyguard, among other roles. As time passed, the two fell in love, but kept their relationship a secret until Shizuku was arranged to marry another noble, forcing the couple to flee the country. Pursued by ninja led by Suzuya, the two knew a simple escape would be impossible. Instead, they chose to gamble their freedom on Gaji's martial prowess, entering the Toushin Tournament in hopes that he would win, become Toushin, and become protected by the power of Toushin City.

Gaji's early bouts were simple for someone of his skill-level, and he easily won his starting bracket, winning over the hearts of fans in the process (including Shuri and Kuri) with his obvious skills and attractive looks. His next opponent, Seed Cashima, looked no more capable of stopping him until Suzuya finally caught up to him. Meeting secretly with Seed in the Ragnard Dungeon, Suzuya made him an offer: she would wound Gaji so that Seed could kill him in the tournament, something neither of them could hope to do alone. Seed would then rape Shuzuku so that she would take her own life.

Gaji's ultimate fate is in the hands of the player, though many avenues for play lead to Seed's death. If the player never even encounters Suzuya, it is even possible to fight Gaji at the height of his powers. The happiest ending for the story has Seed defeating Suzuya, defeating Gaji but sparing his life, and then sending Suzuya away in peace. It can be presumed that Gaji and Suzuya then flee the city to avoid Suzuya's period of indentured servitude. 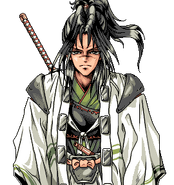 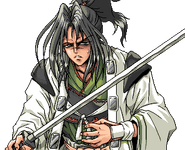 Gaji in the Tournament of the Gods OVA series.