Full was the Kalar Queen from three generations ago, mother of Vivid Kalar. She became Queen in GI0715 and died in GI0810. Unlike her daughter, Full was a free-spirit. She was extremely unfond of the idea of being bound by rules, which led her to act in very selfish ways. Her forceful enclosing born from her responsibility as a queen led her to accumulate a lot of Soul Pollution from her frustration and malaise. This almost led her to become a Devil but she held it down through force of will, cancelling the process. After this, she managed to lower the Soul Pollution within her and a second Time of Change arrived where she would be turned into a Angel, but she suppressed it yet again.

In order to give birth to a heir to become the next Kalar Queen, she was presented a powerful man. She ended up giving birth to three children, being Vivid Kalar the one that would be chosen for the task. Despite the fact that her pregnancy resulted from sexual intercourse, rather than an Impregnating Ceremony, the crystal of her forehead still didn't change, possibly from the denied Times of Change Full went through, making her body more abnormal that that of the typical Kalar.

Having Vivid as the next Queen, Full abandoned her duties earlier than she should have, longing for a life of freedom without earth attachments.

After her death she haunted the royal catacombs with her daughter and granddaughter and possessed her great-granddaughter's body and fought Rance only to be raped by him.

As expected of a Kalar Queen, Full Kalar was greatly skilled at Magic and Curses, possessing Lv2 skills in both. She also reached her very impressive cap of 50, being the only one known to do so. 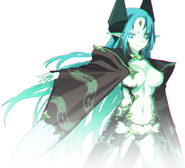 Full as a Ghost in Rance Quest. 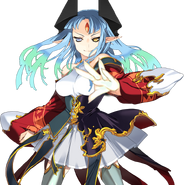