Fubri Matsushita is a regular competitor in the Leazas Coliseum. He is notable for having replaced 60 percent of his body with mechanical enhancements, making him a cyborg.

During the events of Rance 01, Fubri succeeded in reaching 5th in the coliseum rankings before being fought and defeated by the adventurer Rance, who had entered into the competition in order to battle Ninja Master, who he incorrectly assumed to be the ninja responsible for kidnapping girls throughout the city. Fubri was the last of the opponents fought by Rance prior to facing Ninja Master, and was substantially stronger than the competitors fought before him as a result. Despite this, he was still defeated fairly easily by Rance, who went on to win the tournament.

Fubri made a very small cameo during the events of Rance 03, having apparently assisted the Leazas Army in fending off the Helman invaders alongside the other coliseum fighters only to lose and get captured. He is seen battered and tied-up while hanging upside down in the ruins of the battlefield in the city of North alongside Yulang Mirage. While it is unknown what happened to him following this, it is likely that he joined the ranks of the Leazas Liberation Army after they rescued him.

Fubri is a muscular man with a stocky build. He possesses purple hair with several orange streaks running throughout it that is spiked upwards. Fubri's most notable features by far are the cybernetic attachments on the upper right side of his face, his left shoulder, and both of his arms and legs. These mechanical parts are easily identified by their black and green coloring.

Fubri is an arrogant man who seemingly lives only for battle, as he was willing to sacrifice over half of his humanity in order to become a stronger fighter. He showed absolute confidence in his abilities during his fight with Rance and was astonished by his loss. Despite this, he is not an altogether bad person, and appears to possess a friendlier side, as he is seen going out for drinks with several of his competitors after a tournament had ended, showing him to be a good sport.

Already a strong fighter in his own right, Fubri's mechanical enhancements make him much deadlier in combat. Both of his hands contain retractable blades that he can release at will, giving him instant access to his weapons at a moment's notice. In addition, his feet contain rocket boosters that can propel him forward at ultra-fast speeds. Finally, his right eye possesses a targeting device that allows him to lock onto his target to ensure that his attacks always land. Overall, these mechanical implants give Fubri a very fast, aggressive and precise fighting style.

Despite these numerous upgrades, however, Fubri is still far from the perfect fighter. While his strength is substantially higher than the average warrior, he is only around equal to a strong Leazas knight in ability and pales in comparison to more naturally talented fighters. He has never been able to defeat Yulang despite regularly competing in the coliseum, and was handily defeated by Rance during their battle. Even with advanced cybernetics, Fubri is still weighed down by his body's mediocre limits. 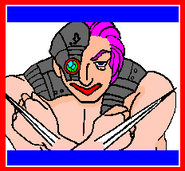