Fomoire was a powerful water elemental Duendy who attacked Shura in the Underworld.

The abundance of jaki in hell combined with Kusanagi Maru's distressed state after being touched by Katsuragi Karin made him impervious to attacks.

Kusanagi Maru got confused by Karin's "human, yet inhuman" Ki and was unable to focus on sucking jaki meaning that Fomoire could not be weakened.

An odd duendy named Cerberus helped out in the nick of time and killed Fomoire. 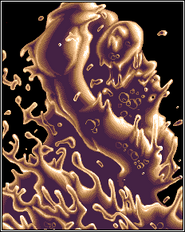