Fletcher Modell is the former general of the Helman Third Army and one of the most famous and important figures of the Military Country. In the past, he was one of the strongest fighters in the world and even in the whole history of humanity, but he rusted himself over time after spending many years outside of the battlefield and was killed in Prince Patton's invasion attempt over Leazas in the 7th Helman-Leazas War. He used to be known as a legendary fighter who fought bare handed and a master of martial arts, trained by the highly respected Gaumroa Matio. He was known as the strongest fighter in Helman and one of the strongest human fighters in history.

Despite holding a legendary status, he retired from combat and weakened over time after dedicating himself to leisure and spending most of his time eating. On the current time, he's arrogant and gross, a shadow from his former self. He died in the 7th Helman-Leazas War after a fight with Rance, which was literally his first exercise in over 20 years. Fletcher's rank in the military was a lot lower than in the past, being a simple commander of the 3rd Army like Henderson Dauntless, but his name and fame still allowed him to enjoy of a comfortable position without having to do anything and getting everything he wants, and he was hardly fit for his role as a commander.

Fletcher was the most powerful martial artist in the history of humanity. His body used to be rough, fit and muscular, showcasing his mighty status, but no signs of that were left in him anymore. Prior to his death he was extremely fat, weighting as much as 137 kg. He was an overall gross and disgusting man, with a repulsive appearance that most couldn't even tolerate. Some people like Sill Plain have accidentally mistaken him for a fat Pig Bambara monster, which says a lot.

His personality is akin to his appearance, being an obnoxious and unpleasant company with a hideous behavior and being an overall distasteful individual. He was rude, selfish and very arrogant, acting as if his former title was still accurate to represent him. He's very gluttonous as well, enjoying spending most of his time eating and sleeping without having to worry about responsibilities or having to put effort into anything, which he's able to do at will thanks to the absurdly amazing title he boasted in the past. He has a habit of ending his phrases with an "oink" for some reason, which certainly doesn't help in distancing him with the family of pig monsters. He was very lazy as well, and lacked motivation to do anything, preferring to send subordinates all the time to handle stuff for him. Even when he's attacked directly, he will do everything in his power to avoid having to get up from his comfortable position and send every last subordinate he has, and would only fight if it's absolutely and 100% necessary.

In his prime, he was the only man stronger than Thoma Lipton. At the age of 10 he defeated a master of martial arts and was called humanity's strongest man at the age of 18 after he won all the fighting tournaments in the world.

At some point he encountered Dark Lord Kite, a strong Dark Lord that spends most of his time training and specializes in hand to hand combat. Fletcher fought the Dark Lord and, impressively enough, the battle ended in a draw despite the fact that Fletcher had no means to break the Dark Lord's invincibility field. He was able to do this thanks to a very specific and complex style of martial arts Fletcher employs. This style is based on evading and redirecting physical energy back to his target, similar to Juijitsu or Judo, but far more complicated and difficult to achieve. By redirecting his attacks back to him, he was able to hurt Kite through his invincibility field, since attacks that originate from Dark Lords can ignore the invincibility field. The battle was fierce and long, but he managed to end it in a draw after they were both forced to retire.

Being able to tie with a Dark Lord that masters Physical Combat gave Fletcher a legendary status. He is a prime example of how negligence can weaken a person so much. At present, he's a complete joke and can easily be defeated by a regular adventurer since he spent decades without fighting or even doing any type of training or exercise whatsoever. If he had kept up on his training, he would have crushed Rance in their encounter.

Despite the skills of his former self, he was no match for Toppos, who nearly killed him. 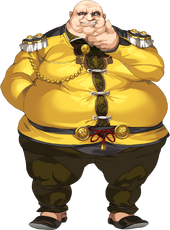 Fletcher in battle in Rance III.