AliceSoftWiki
Register
Don't have an account?
Sign In
Advertisement
in: Articles with Minor Spoilers, Characters, Male characters,
and 2 more

He's recognized as a genius man, and became the General of the White Army being only 27 years old, becoming the youngest Commander in the history of the country. He's an impeccable strategist, greatly talented in sabotage, reconnaissance, and military tactics. He's a true master of the art of war, and he's been capable of influencing large-scale battles to Leazas' favour in more than one occasion. A Patriot of Leazas who always puts the country first. He recognizes Lia as competent, but is nonetheless worried when it comes to her love affairs.

He made his first appearance in the non-canon Kichikuou Rance, where he rose as the Leader of a Rebellion after witnessing the horrendous crowning speech of Rance, the new King of Leazas, which made Ex believe him to be a brutal and horrible dictator. He gathered many competent soldiers from all the Units, and led a Rebel army along with his former mentor Pegasus Fort. While he was initially greatly inspired and motivated with taking down Rance from the throne, he was very discouraged after he invited Rick Addison and Barres Province to his Rebellion, yet both of them declined and chose to side with Rance.

Ex was very conflicted and immersed in a deep dilemma over this, as he believed Rick and Barres to be wise individuals, and he found strange that they would support someone like Rance. Furthermore, both of them had fought alongside Rance in the Leazas Liberation Army in the year LP0002, where they met him and experienced his ability first-hand, whereas Ex never had the chance to meet him. Believing that they might know a side of Rance he's unaware of, Ex was very conflicted with whether his Rebellion was right or wrong, and mostly continued with it because of the trust all the members of the Army he gathered had deposited in him. In the end, Ex was defeated by the Leazas Army led by Rance and many of his loyal followers perished. His lack of security greatly influenced his leadership, and he was captured by Rance. Whether he's executed as a traitor or not depends on the player's decision but, if he's allowed to live, Rance will kick him off the Army, and he will return months later to save the country from an Emergency that would destroy the country, after which he will rejoin as the General and vowing loyalty to Rance.

In the canonical timeline, Ex only made a physical appearance in Rance 03 during the 7th Helman-Leazas War. His only appearance was during a scene where Rance was offered to meet the other Generals of the Leazas Army, but he only talked with Ex for a very short period of time before losing interest and didn't even bother to meet the others. Despite his lack of screen-time, Ex greatly contributed to the War, leading a guerrilla warfare against Helman in the north of the country with help from Cordoba and also, ironically, suppressing a Rebellion from Nobles of the country. He is confirmed to appear in Rance X.

Ex is a somewhat handsome man with a short white hair that combines with the color theme of his army. He wears rounded glasses, and the signature armor of the Leazas White Corps. He's a relatively short and slim man, being 168 cm tall and weighing only 49 kg.

Like stated earlier, he's an incredible genius that is deeply worried about the future of his country, and always acts based on what he believes will be the best for the people. A poet and a philosopher, he doesn't believe in accomplishing things through force and is a cautious person that always plans things far ahead before doing them. He's always worried about the affairs of the country, and is incredibly devoted and dedicated to Leazas, with a deep love for his nation that probably only rivals with that of Barres Province, though he's more reserved about it. He's always opened for debate, and doesn't think of his beliefs as absolute, always willing to accept his mistakes and to learn from others.

He recognizes his queen Lia Parapara Leazas as a competent and talented ruler, and accepts her as such, but he's frequently worried by her obsession with Rance, as he thinks he's untrustworthy, although he still finds him an interesting individual due to his unquestionable ability and admits the support he's given to the country after he saved Leazas in the 7th Helman-Leazas War.

He used to be married but at some point his wife passed away from unknown means. Despite this, he claims to still love her deeply and show no intention of marrying anyone else, remaining faithful to her even to this day. He's only slept with Melfeis Promenade to prevent her from succumbing to the curse placed upon her, but doesn't harbor any romantic feelings of her and seems to be unaware of the way she feels about him.

Prior to becoming the General of the Leazas White Corps, he trained as a recruit along with Rick Addison and the two became close friends. Both were deeply saddened for the others' betrayal during the events of Kichikuou Rance. Upon joining the Army, he served under the previous commander Pegasus Fort, who has acted as his mentor and confidant ever since. Though the two bicker frequently, Ex respects Pegasus highly and Pegasus views him as the future of Leazas in return.

As the General of the White Corps, Ex holds a Military Rank high enough to give orders to almost any soldier in the Leazas Army, and is given free will to act based on his own judgement in emergency situations.

Despite his high ranking, he has a Level Cap of 29, and his current Level is only 18, however, this is because Ex has little talent in fighting directly himself. As a strategist, he prefers to think up plans and lead his army from the back line. He's extraordinarily efficient and resourceful, capable of coming up with unconventional strategies, or using the environment to his benefit. With a Strategy Lv1 skill, Ex is an extremely capable tactician and remains undefeated due to his uncanny ability at deducing the weak points of an opposing army, and predicting their movements. His bright mind and thoughtful demeanor allows him to come up victorious even in battles where he's outnumbered and cornered by his enemies.

His biggest weakness is his weak and fragile body, as most soldiers would be able to kill him in a direct encounter. In the rare instances in which he enters the fray himself, he fights by wielding a sword. He has a Sword Combat Lv1 skill, but he's not a trained warrior and is barely enough to fend himself against weaker opponents, being the weakest of the Leazas generals in terms of direct combat. 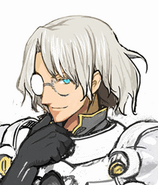 Concept artwork of Ex from the Alicesoft development blog.