Evenicle 2 is the sequel to the ero adventure RPG of the same name released in 2015, produced in response to the success and positive reception of the original Evenicle. Like in the previous title, Alicesoft brought in for the project the character designer of the Senran Kagura series Nan Yaegashi, famous for his simplistic yet appealing art style. It was originally scheduled to be released in December 21st of 2018, but was later delayed to February 22nd of 2019. The game was released in English on February 23, 2022 (coincidentally, the fourth anniversary of Rance X), on multiple adult game platforms. It is the first English translation released directly by Alicesoft themselves.

Following with what was established in the first entry, the game is set in one of the fragmented worlds in the World of Eve, albeit one that has different rules. The game features a completely new cast of characters, following the adventures of Alex, a young doctor who travels around in order to cure women afflicted with disease using a power known as Medica, an ability that allows him to heal his patients through sex, while trying to stop the plans of a mysterious organization known as Ixtab who are spreading the strange "Hero Syndrome".

Throughout the game, the party may encounter Ramius, who is on a quest on her own. The only other characters from the previous entry who will appear in the game are QD (who was confirmed before the game was announced) and Arthur. 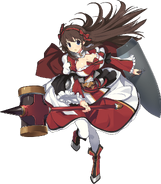