Eleanor Ran was one of the apprentices of the mage Ragishss and at one time known as one of the Four Witches of Kathtom. Her specialties as a warrior are illusion, mind control, and swordsmanship. Due to being possessed by the magic Phil Rings in Rance 02 she was first introduced as a villain, but once freed from the Rings' control she has proven herself a noble woman and an ally to the heroes in the Rance series.

She possesses a strong sense of duty and responsibility towards her friends and her town. She's a very old fashioned girl who believes in having sex only with the one you marry.

Under the influence of the Phil Rings she became sadistic and lewd, torturing girls for pleasure. However, her true personality is a meek, responsible woman, more so than her companions in the Four Witches. She is kind to others, and strict with herself.

Since removing the Phil Ring, she feels tremendous guilt for the acts she committed under its power. Since then she has worked hard for the city of Kathtom as an atonement.

Eleanor has a bad habit of keeping her feelings to herself and tends to think negatively of herself. In Kichikuou Rance, the frustration she felt upon being forced into Rance's harem lead her to become suicidal.

She has long red hair and usually wears formal outfits. She may have taken that habit after she began serving as Kathtom's mayor but she can still be seen in formal clothes when adventuring.

Eleanor is a skilled "Spellblader," which is a very rare talent on The Continent, being adept with both illusion magic and a sword. In Rance 02 she was capable of controlling peoples' minds with illusions, making them lose control of their senses to the point that her enemies would sometimes just lay down and pleasure themselves. When fought by Bird Lithfie, he attempted to counter her magic technique by closing his eyes, but Eleanor simply relied on her sword technique and walked forward and cut his arm off.

While her magic and swordplay are individually not powerful enough to put her on par with the The Continent's strongest, her proficiency with both allows her to be a considerable threat. She has an above average level cap of 30 and her current level is 15, having weakened since becoming mayor and foregoing her training to focus on administration.

One of the Four Witches of Kathtom, she appears in her own maze whose layout somehow resembles a human's internal organs. Her task is to abduct young girls from town and turn them into slaves till they are ready to be "used" by Shizuka Masou. She is opposed by Sill Plain and Bird but defeats them, mind controlling Sill and giving Bird his missing arm.

While forcing Sill to pleasure herself, Eleanor is snuck up on by Rance and defeated. The Phil Rings can only possess virgin maidens so Rance rescues her from the curse the only way he knows how - taking away her virginity. She immediately loses the ring and reverts to her usual timid self.

To repent for the actions of her and her comrades, Eleanor becomes an employee in Kathtom's mayoral office to aid in the town's reconstruction, eventually borrowing money from Leazas.

In the last chapter of story, Eleanor fights against Ragishss with the other Four Witches after he gains the Phil Rings' full powers, but is beaten and forced to retreat. She helps Maria with her canon as Rance, Sill, and Shizuka take on Ragishss for the final time.

She appears as one of the leaders of the Kathtom Defense Force fighting against the Helman forces but is injured and unable to participate in further combat.

Rance sees her through a magical device in Ylapu's West Tower, in her room talking to herself about the Kathtom budget deficit. She was slightly aware of the presence of Rance but assumed it was her imagination.

She appears as Kathtom's Mayor to negotiate the town's surrender to Rance's invading force. She eventually joins Rance's army and harem, along with Shizuka, Maria, Milli, and Mill.

By this time, Eleanor had lost much of her purpose. Kathtom's reconstruction was completed, its businesses were thriving, and the youngest of the Four Witches of Kathtom, Mill, had already grown up and could take care of herself. Eleanor mentioned wanting to commit suicide to pay for her crimes committed when under the Phil Rings' spell. Rance understood this and gave her a new purpose for living: to hate him and protect Shizuka, Maria, and Mill from him. 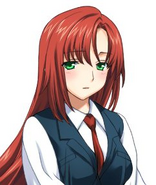 Eleanor crazed by the ring was sadistic and brutal.

Eleanor with her unit in Kichikuou Rance