AliceSoftWiki
Register
Don't have an account?
Sign In
Advertisement
in: Articles with Spoilers of Rance Series Finale, Characters, Rance's Children,
and 8 more

El Mofus is the main protagonist of the additional scenario Rance X: Part 2 during the final game of the Rance Series. Unlike the titular character of the series, El is a silent protagonist whose appearance and gender are chosen by the player, and their only forms of dialogue are selected by the player through multiple choices. Additionally, they're a character who is largely intended to represent the player himself and the game switches to a second person style of narration, referring to El as "You".

El is the son or daughter (depending on player choice) born between Demon King Rance and the pope of the AL Church Crook Mofus. El grew up in a remote town on the Free Cities Alliance and lived a secluded life with their beloved mother until their 13th birthday, when she revealed their ties to Demon King Rance. Upon doing so she gave them an important mission, to gather all of the Demon King's Children scattered throughout the continent, find The Five Orbs needed to access the Demon King's domains and defeat their father. Throughout the events of Part 2, El traveled throughout The Continent, progressively increasing the members of their El Party and going through a variety of different adventures.

In the very final post-credits scene of Part 2 El is revealed to be the human incarnation of the Creator God Ludo-Rathowm who, following the Pope Crook Mofus' proposal, incarnated into, or at least used a part of its soul to create, a regular human being in order to experience the world he created first-hand. Though El themselves doesn't seem to be aware of their real identity.

El is a character whose gender and design are chosen by the player, with a total of four alternative versions. The only physical trait all four of them share is the goggles they wear, be it on their head or on their necks, which closely resemble their mother's. The options for the player are:

Much like many aspects of El's character, a good portion of their personality is displayed through dialogue selected by the player on given opportunities, making their personality extremely variable depending on the choices. However, in a general sense, El is noted for being a rather quiet individual, somewhat reserved and not engaging in dialogue unless they need to. They also seem to be easily influenced by those around them, and are a surprisingly obedient and docile person that often follows other's advices to act, be it positive or negative. El also has a deep love for their mother Crook, who raises and treats El tenderly and with affection, growing closely attached to their mother.

Being the child of the Demon King and the pope, El has an incredible talent matched only by a handful of others. As one of the Demon King's progeny, they possess the amazing blessing of having no Level Cap like their father, allowing them to grow infinitely stronger with progressive training. They also were seemingly able to level up at a fairly fast rate, with nothing to envy to their father's. El possesses a rare talent as a spell-blader proficient both in swordsplay and Magic, fighting primarily by wielding a sword in combination with magic attacks of thunder element. They display Lv1 skills in both fields that allow them to reach a considerable amount of skill, although El doesn't quite excel at either and are overshadowed on said fields by genius swordsmen like Zance or experienced mages like Shizuka. Their greatest skill is their amazing talent for Divine Magic, an art extremely rare in the continent following the Divine Anomaly, making El's healing abilities extremely valuable, on top of giving them an even more versatile skillset. While their knowledge of the art isn't as extensive as that of more renown users like the high-ranked members of the Church, El is talented enough to be able to learn most techniques by merely reading them. El also possessed a fair amount of skill as a leader, being able to competently lead their party in their journey to defeat Demon King Rance, albeit with a constant need for advice and some assistance from Shizuka.

At the start of Part 2, El had already received extensive training from their mother, standing at level 32 and already showcasing expertise on all their talents, with Rocky claiming shortly after meeting them that El was already comparable in fighting ability to the greatest allies that were part of their father's party back in the day. However, having never left on an adventure on their own and being closely dependent of their mother, El was incredibly inexperienced. They were very naive, somewhat confident and incredibly ignorant of the basics of adventuring and of the outside world, forcing them to rely on their allies for support and guidance, with Arms Arc in particular serving as a valuable mentor figure for the inexperienced child of the pope. El displayed an extraordinary aptitude for growth, being able to consistently improve and learn throughout their extensive adventure.

As the incarnation of the Creator God, El possesses a number of abnormal powers within them that are inaccessible to anyone else. Despite not being exactly one and the same, they have a certain degree of authority over Gods, allowing them to forcibly control Quelplan to some extent, although El was only shown to be capable of making use of this power on desperate struggles. Additionally, El is seemingly able to bypass some of the standard rules of the continent, being able to wield both Nikkou and Chaos without their consent or forming a pact with them like it's usually required. El is also blessed with the ability to instantly Level Up after reaching the necessary experience, allowing them to grow stronger more efficiently than other people that have to rely on Level Gods or Level Stores. Despite their connection to the Creator God, beyond these powers, El is for all intents and purposes a perfectly normal human being, with all the strengths and weaknesses they possess, being just as vulnerable to hunger, disease, injuries or emotional turmoil as anyone else. 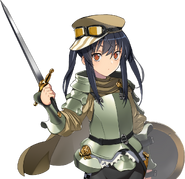 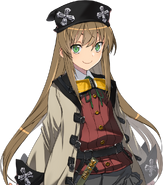