Edge is the subordinate and adopted son of 3G, the chief retainer of Oda House.

Born toward the end of the GI Era, Edge lost both of his parents as an infant to war. Some time following this, he, along with another war orphan known as Kichou, was found by 3G and taken under his care. As he grew older, Edge began working as a servant of the Oda family, assisting 3G in carrying out all of his duties as chief retainer.

At some point in the past, 3G organized a marriage between Edge and a male Youkai. Edge was not informed of his partner's identity until the night of his wedding, and ran away crying as soon as he learned it. He spent several years struggling to successfully carry out a divorce and still looks back on the experience with dread.

During the events of Sengoku Rance, Edge continued to act as 3G's aide under Oda's new ruler Rance. After Kouhime was kidnapped by the Dark Lord Xavier and his henchmen, Edge organized the search party that successfully tracked down her location. Later, he organized a similar search party for Kurusu Miki, who had run away from Oda after losing control of her powers as the Demon King.

Edge makes his most prominent appearance during Yamamoto Isoroku's non-canonical alternate story route. After Xavier begins impersonating Oda Nobunaga following Kou's death, Edge is the first person to notice his lord's suspicious behavior, noting that he didn't cry at all upon learning of his beloved younger sister's death. He voices his suspicions to 3G, who agrees with him and orders an investigation on the matter, which reveals the truth about the false Nobunaga's identity in the process. Later, after Rance is assigned the duty of siring a new heir for the Oda Family posthumously by the real Nobunaga, Edge is placed in charge of gathering noble women from all across JAPAN for him to sleep with. After the mysterious woman Keikoku seemingly gives birth to Rance's child, Edge is ordered by 3G to investigate the truth of the claim. When the baby is revealed to be unrelated to Rance, Edge expels all individuals associated with Keikoku from Oda.

Edge uses a slightly altered version of the generic "young man" portrait for his appearance, causing him to appear to be a slim young man with short and somewhat spiky light grey hair wearing a pair of glasses and a brown kimono. While his age is unknown, as he was an infant when Nobunaga and Kichou were young children, he was likely in his late twenties during the events of Sengoku Rance.

An anxious and somewhat paranoid man, Edge is seemingly trapped in a perpetual state of stress, likely as a result of being overworked. This attitude is only amplified by his interactions with 3G and Rance, who consistently create more problems for him to resolve. Despite this, he is nonetheless completely devoted to serving the Oda family, and will deftly and efficiently carry out any task he is assigned by it. He seems to have been particularly close to his former lord Oda Nobunaga, as he was instantly suspicious of the Dark Lord Xavier's attempt at impersonating him, something that even Nobunaga's closest retainers did not immediately pick up on.

Edge was raised by 3G since infancy and has loyally assisted him in his work throughout his life. When interacting with Edge, the normally put-upon 3G speaks with an uncharacteristic amount of arrogance and frivolity, frequently ordering Edge to perform feats nearly as absurd as those that Rance assigns him. 3G takes full advantage of his status as Edge's adoptive father in order to guilt him into doing these daunting tasks by reminding Edge of all that he has done for him. Despite this, 3G genuinely recognizes Edge as his son, even to the point of occasionally forgetting that he is not in fact a Youkai like he is. Edge is regularly exasperated by 3G's treatment of him, but continues to speak to him with the utmost respect regardless, and never at any point disobeys his orders.

As 3G's subordinate, Edge's main duties are to function as a proxy for him in situations where 3G is unavailable and then relay the information back to 3G himself. Because of this, he is shown to be as adept at organizing and generally managing the forces of Oda as 3G is. In particular, Edge seems to be skilled at operating search parties, as he is the person responsible for creating the groups that found Kou and Miki when both went missing. Edge also appears to be very good at reading others, as he was one of the first people to become suspicious of both Xavier and Keikoku when they were posing as allies of Oda.

Besides his skills at management, Edge is also required to perform more mundane tasks for the Oda family, such as cooking, cleaning and making tea. He is apparently a moderately talented chef, as Rance complimented his dango as being "fairly decent", praise that he would not normally give to a man's cooking. 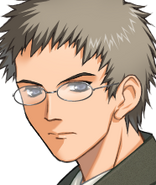