AliceSoftWiki
Register
Don't have an account?
Sign In
Advertisement
in: Articles with Minor Spoilers, Articles needing a Quote, Level Cap Reached,
and 6 more

Dolhan Cricket is one of the last remaining Insect Users on the Continent and an obedient slave of Emi Alphorne. He is her personal servant, and though she treats him cruelly, he has long since been completely broken and serves her faithfully.

The Insect Users were not so long ago a fairly large tribe living in the Kingdom of Zeth, however the village was destroyed and almost all of its inhabitants wiped out on order of the then now previous King of Zeth, who like most in Zeth considered them to be repugnant and despicable creatures, who to top it off possessed odd powers that even the magic users could not duplicate and could pose a threat to the mages of the Magic Nation. After the massacre only Dolhan and Caloria were able to survive, but Dolhan was captured and enslaved by the Alphorne family, where he endured years of cruel treatment at the hands of his master. Years later, Dolhan would follow the young and vicious Emi Alphorne everywhere, including her hunts with her fiance Hassam Crown on the weaker Zeth citizens. As Emi lacked any particular inclination for fighting, she would order Dolhan to maim and slaughter in her stead, orders to which he would reluctantly agree. However on one such hunt, the three of them encountered Rance and his compatriots from Ice Flame and both Dolhan and Hassam were swiftly defeated.

Emi and Dolhan managed to escape the encounter and Emi returned to her main duties as head warden of the Zeth Women's prison, where Dolhan would still serve her as a her slave and bodyguard. However Rance soon invaded the prison in the hopes of tracking down the beautiful Emi, and she would have been raped then and there if not for Dolhan suddenly appearing and attacking Rance, was saved by Kaoru's intervention but up being struck by Dolhan's powerful poison darts, forcing the party to retreat in order to save her life. As Emi was enraged by Rance's attack on her, she soon plotted her revenge on Rance. First, she went back to the insect village and forced Dolhan to absorb more insects and make him even stronger at the risk of his own life, then she made him kidnap the young Karma Atranger, a girl from Ice's Flame Orphanage, in order to lure him into a trap in the ruins of insect village. Because of the power of Dolhan's poison, Rance was soon incapacitated but was saved by Caloria Cricket, the one other survivor of the slaughter who had survived for years hidden in the ruins.

Though Rance escaped, Emi discovered Caloria and ordered Dolhan to capture and rape her, hoping to start a new line of Insect Users indentured to Emi. However, when given orders to assault the only indirect family he still had, Dolhan for the first time in years refused. As Emi was starting to threaten the girl's life, Rance's team arrived and attacked Emi and Dolhan. Though Dolhan had grown much stronger with all the insects he'd absorbed, he was already starting to lose control over them, and Rance quickly managed to bring him down. As Rance started having sex with Emi, a deformed and enraged Dolhan rose once more attacking Rance. However, Caloria appeared and told the warrior that Dolhan was already dead, as the insects within him have completely destroyed his body, and requested Rance to end her fellow Insect User's suffering. Now too far gone, Rance quickly finishes off Dolhan with a blow to the forehead, completely ending his life for good this time.

Dolhan is a strange gnarly figure, with a rough square face and what appeared to be a large hunchback caused by the surplus of insects teeming with his body. Like Caloria, his body is covered by the tattoos of the Insect User tribe, and his attire is similarly simple green robe traditionally wore by Insect Users.

Though he sports an ugly and violent expression, Dolhan is at core a fairly kind creature that has experienced years of torture and enslavement have made him utterly obedient to Emi Alphorne, to the point that he shows no hesitation in killing both to protect her and when she orders him to. He's extremely submissive and would follow any orders given to him by Emi without hesitation, as well as displaying an immense amount of loyalty and pushing himself to extremes in order to keep her safe, even at the cost of his own health. Despite having participated in brutal operations under Emi's orders, Dolhan himself was not an evil man and had a firm sense of morality, and finally balked at Emi's more extreme orders when another Insect User was involved. He described sexual intercourse as a sacred act that should only be performed by two people in love with each other, and couldn't bring himself to abuse of a young girl even under his master's orders. He was also very hardworking and devoted, training and fighting tirelessly for the sake of his lord.

As one of the last existing Insect Users in The Continent, Dolhan carries rare and unique abilities inherent on the members of his tribe, with a Lv1 skill as an Insect User that allows him to become an expert User of the skill. Thanks to this he was able to carry at least four Insects, the minimum number to be considered a fully-fledged user, and was a moderately powerful fighter capable of giving a challenging battle to even experienced warriors like Rance and his group at the start of their journey. At some point, Dolhan reached his Level Cap of 37 and was forced to ingest even more Insects in order to grow more powerful. He became even stronger and was able to rally monstrosities to his side at the cost of his own well-being, but in exchange was then capable to continue representing a threat to Rance's team even as they continued to raise their Level and got much stronger. The most dangerous thing about Dolhan was his special poison darts: the poison could kill even strong warriors in a matter of weeks, and when Dolhan boosted his power the lethal concoction could bring even the powerful Rance to his knees in mere instants.

At the time of his final battle, Dolhan had an extensive array of Insects that granted him a diverse and varied skillset, including:

All these Insect made him a dangerous and powerful fighter, but Dolhan's talent as an Insect User was not good enough to maintain this huge number of bugs, which resulted in his death after pushing himself too far during his battle against Rance. 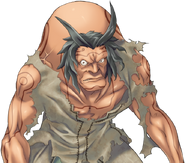 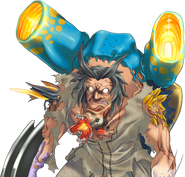 Dolhan after absorbing a large number of Insects.