Deirdre is the most powerful of the Duendies and is also referred to as the Daughter of Darkness. Her only goal is to destroy and cause suffering, but she seems to have taken an odd interest in tormenting Shura in particular.

She was born out of a blood sacrifice performed by the Ginnungagap sect. After many sacrifices they took to sacrificing Shea, the pure princess of the Saeruuna Kingdom, which was deemed worthy enough. Her first act was to ridicule and torment the knight and then curse him through a trick to suffer forever until she tired of him.

She is a very powerful being well versed in all kinds of magic, but also a strong and fast fighter using a huge sword. She is also capable of collecting jaki and birthing new Duendies.
Despite all this she prefers to scheme and have others do the job for her, only poking in to torment Shura further.

The Six Stars were created by her and are her most powerful creations at the time.

During the game she pops in to torment Shura, but occasionally points you in the right direction. This is all to further her plans, as it was her goal all along for Shura to beat The Six Stars as the positions of their death would make a giant hexagram on the earth. The jaki of her daughters was enchanted to come together and help with the casting of a giant spell.

This spell would create the Crystal Palace, a crystalline structure composed entirely of jaki, which could contaminate the earth entirely. Direct interference by Angels or Demons would cause the destruction of the structure and cause the world to still be contaminated. This would mean the world has to be destroyed by God. The only way to prevent this is for someone to completely erase Deirdre so the structures ceases to exist instead of being destroyed.
An intended side effect of this was that the former Roman emperor Nero was set free from his eternal prison in hell, she took his soul and rebirthed him into a giant machine-like labyrinth Duendy capable of casting strong spells as an extra deterrent.

She gives Shura 3 days to say his goodbyes and then to come and settle it. Whilst she probably did expect him to beat Nero, she probably miscalculated the usefulness of Karin's angelic powers and ultimately lost as Shura used his soul to cancel out hers leading to mutual destruction.

In the end it turns out that Shea was never fully consumed, one half of her in Karin and the other half still part of Deirdre herself. She never seemed capable of easily killing Shura despite her capabilities and her magic has always been hampered somewhat by her mixed soul. As her soul gets completely destroyed, the other half of Shea's soul is freed which then destroys itself entirely to save Shura much like he did for Karin. 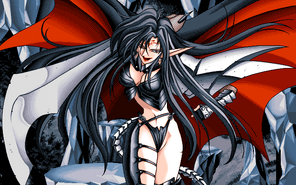