Dark Duck is the codename given to an assassin of the special assassination brigade working for Helman, the Dark Wings. Like with most members of the group, his real name remains unknown.

A particularly strong member of the group, Dark Duck is an expert assassin specialized as a long-ranged killer, being an incredibly precise sharpshooter. He wields an ultra-ranged crossbow from a distance to take down his targets from afar without giving them a chance to react, similar to a real-life sniper. In addition, his arrows contain a deadly poison from a monster that can quickly kill humans that get hit by his arrows.

In Rance IX, he tried to assassinate Patton but mistook his body double Potauf for the real prince and was stopped by Hanty Kalar, who reflected one of his shots back to him, dying from his own weapon as a result. Someone else later took his position and wears his signature clothes to replace him. 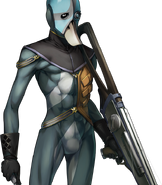