Daiteikoku is a conquest simulation game (SLG) published in Japan by AliceSoft in 2011. It is the third game in AliceSoft's loosely connected "Dai" series, preceded by Daiakuji and Daibanchou.

Daiteikoku (English: "Big Empire") is a space themed anime parody loosely based on the events of World War II. Players follow a cast of over one hundred characters from the perspective of the protagonist, Tougou Tsuyoshi, in an interstellar space war that is rife with historical deviancy, anime tropes, and amorous encounters.

How to buy[edit | edit source]

While Daiteikoku cannot be purchased from an English distributor, the Japanese portal for DL Site sells a digital download of the game, found here.

Daiteikoku is originally published in Japanese.

An unofficial fan translation spanning 35% of the game's script and 100% of the interface—MediaFire source here—was published in 2012 and remains the most complete English translation to date.

As of February 2, 2021, no further news regarding English translation has been made known.

The primary fan-driven English translation project was established on June 23, 2011, employing a number of translators with markedly different translation and writing styles. The project's 35% completion patch, published March 10, 2012, would become its last due to lack of consistent motivation as well as sheer script size. (Daiteikoku has one of the longest scripts of the visual novels of its time, cited repetitively by AliceSoft as a selling point.) A number of translators attempted to revive the project, but no further publications were made.

MangaGamer has made no announcement concerning the translation of Daiteikoku. The company displays their translation projects on the project status page of their official blog.

A full Chinese translation which builds upon two previous partial translation efforts was released on April 07th, 2018. It was available here, though as of July 7, 2020, this URL delivers a 404: Page not Found error. Another source link is needed. 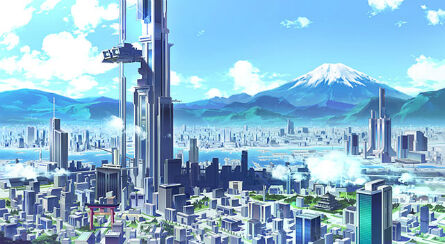 Below is a translation of the official Japanese synopsis.

Long before the universe united, its many planets were inhabited by small human factions. Nations were established, yet navigation to other regions in the universe—essentially making contact with others—was impossible. Such travels at the time would have required hundreds of years.

However, The Empire of Aeris soon discovered strange bodies scattered throughout the universe. Upon further research, they learned these, hence called "warp gates," enable one to instantly move from one location to another. This advancement allowed many regions, previously isolated from each other, to begin making contact—thus beginning the Age of Discovery.

Over time, major powers were established through conquests, destructions, and submissions. The current universe is the very result of this.

It is now 939 A.D, and conflicts continue. At the summit is The Empire of Aeris, the world's largest nation, still at large due to their warp gate technology. They vow to unite the universe and restore peace to the world. In contrast, The Empire of Japan—the world's oldest nation—is nearly ruined after prolonged wars with The Empire of Chun. But, unable to bear the death of the previous minister and numerous veteran admirals, the Empress (Mikado) takes drastic measures. She appoints Tougou Tsuyoshi, a renowned, unorthodox admiral, in charge of the nation's navy, which must be rebuilt from practically scratch. Mikado has an eye for potential men, and she believes Tougou Tsuyoshi has what it takes to protect The Empire of Japan.

AliceSoft later published patch 1.02 which added the hotly demanded ability to scout battles before committing to them. Many other updates were bundled in patch 1.02 as follows:

Announced September 2012, a figurine of Mikado is announced for January 2013.

Figurines of Reltih Adolf were announced for Feb 2012 and July 2013.