Daidouji Komatsu is a samurai from the Houjou House, which is a rare case since the Houjou are mostly Diviners proficient in the Yin Yang Arts.

She's a very lovey dovey girl, portraying a very girly and naive demeanor, although she's not nearly as innocent as she acts. She's in love with the Head of House, Houjou Souun, who she's very devoted to and loves passionally. Komatsu loves him much more than the Houjou House, to the point that she would just defect if he goes missing or dies. She has a very hostile relationship with Nanjou Ran, hating her a lot for her romantic relationship with her precious Souun.

Komatsu's extremely popular with the populace, almost like an idol, worshiped and adored immensely, having countless clubs of fans dedicated to her. These people cherish her so much that if she were to be captured and imprisoned they would immediately rise and form revolts to pressure the Lord in charge of her imprisonment to release her.  When it comes to her battle skills, she's pretty strong, with her current level being 35 and carrying Guard, Sword Combat and Spear Combat skills.

In army battles she's pretty competent too, since her army is mostly composed of fans of her that passionally fight for her to the death. 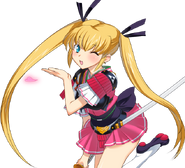