Cutie Band was the former Captain of the Zeth Public Safety Squad. Despite her young age, she managed to reach a moderately high ranking in the ladder and was given the right to lead platoons of officers and Walls from the Public Safety Forces.

During the events of Rance VI, Cutie made several appearances throughout the events of the game by chasing after the members of the Green Corps from Ice Flame during their different resistance missions. Though she tried to arrest them several times and even prevented them from accomplishing some of their objectives, she was never able to successfully capture them. Eventually during the incident where the Pentagon managed to take over the Headquarters of the Public Safety Squad, the extremist group took Cutie and many other officers as hostages to demand the surrender of Chizuko Yamada, from whom they wished to obtain information about the Mana Batteries. In order to pressure the Zeth Government, the extremist leader of Pentagon Nelson Server began executing innocent members of the Public Safety. However when they were about to kill Cutie, they were interrupted by the leader of Ice Flame Rance, who was not about to let a cute girl die if he had anything to say about it. The two rebelling groups fought and Rance managed to rescue Cutie and escape, but unfortunately for her, Rance followed his heroic rescue by raping her immediately after as "reward", leading to an enraged Cutie to escape while declaring that she will punish him for it. On their next encounter Cutie instantly recognised him and fervently tried to punish him with little success.

After the Monster Invasion took place, she was among the ones unfortunate enough to be captured by the Dark Lords in the Zeth Capital Ragnarokarc and was forced to work as the personal maid of Dark Lord Camilla. Soon after, she apparently made a simple mistake, and to punish her Camilla sentenced her to get raped by a hundred people in a row, even as those who failed to comply were mercilessly killed right in front of her. At some point, the constant horror broke down her mind and though following the defeat of the Monster Army, Cutie managed to miraculously survive, she was permanently scarred by the experience, and was sent to a mental hospital where she's been vegetating since.

A fairly cute but otherwise average girl, Cutie was a young woman with an indistinctive appearance. She had a short brown hair tied with two short twin tails and sported the standard uniform of Public Safety Officers along with a white cape.

She was a determined and passionate person that wouldn't hesitate to attack and  accomplish her mission in order to bring order to the streets of Zeth. She believed in what she was doing as the right thing, punishing those that went against the law due to them disrupting the peace. She was seemingly oblivious to the cruelty and brutality of the higher-ups, following the orders of her superiors without questioning. Though she was never ordered to get involved in acts of corruption, she never questioned the decisions of her superiors, believing that if criminals were deemed evil then it was probably true, and like most 1st class citizens, she had inherent prejudice against the magic-less 2nd class. She was an aggressive and fearless person, dedicated in the pursuit of criminals and very diligent. Despite those qualities, she was quick to panic and cry during dangerous situations were her life was on the line, as she completely lost her cool during the incident with Pentagon.

As a Captain of the Zeth Public Safety Squad, Cutie was a fairly competent individual that could lead squads of her own in order to arrest criminals and outlaws of any kind. She had the authority to consistently call for multiple waves of soldiers for as long as she saw necessary, suggesting that her rank and position was a moderately high one. Despite her position, she herself carried next to no fighting abilities, relying exclusively on her commanding officers during a fight. As a 1st class citizen she had some magical abilities, but was not particularly proficient in it. She was always accompanied by two Magic Walls that acted as bodyguards, protecting her from enemies and as Cutie also lacked any remarkable Skill Levels that would make her stand out as a commander or a leader, she was a competent but otherwise average officer, relying on numbers to get the job done. 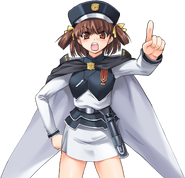