Saint Croix Eden is a saint of the Church of Eve, and a princess of the Kingdom of Eden. Prior to her marrying a commoner, Aster, she was second in line for the throne. Due to her high spiritual power, among other factors, Croix was considered to be a near-reincarnation of Mother Eve, which prompted several international organizations to celebrate her engagement to Prince Felton of Central by recreating Mother Eve's journey to her own marriage in the form of a rite of the church. Unfortunately, this proved to be a machination of the Snake Crest, a conspiracy that planned to use the ritual to empower Croix with Eve's power, allowing her to recreate the world according to Snake Crest's directions.

As part of the second stage of Snake Crest's plans, the organization drugged Croix with Adan's Blood, and then publicly broadcasted her being sexually assaulted by several Ham Bambara monsters in order to discourage the public's faith in Mother Eve. While Croix was rescued by her future husband and his family (including her sister, Riche Eden), this public humiliation devastated public confidence in Croix, leading her to recede from public life. While Croix no longer served as princess or saint in public, she did not allow this change in situation to discourage her from trying to help others. After a period of recovery and training, she was able to channel her newfound powers to destroy the Outlaw curse on specific victims, which she intends to use to help those who became Outlaws through no fault of their own.

Croix's similarities to Mother Eve extend beyond her considerable powers. Croix is almost universally motherly and loving, though she prefers to act like a big sister to most of her immediate family, especially her blood siblings Riche and Phillip. She loves children especially, and enjoys spending time with them, both because of her relationship to Mother Eve and due to her own lost childhood. Also like Mother Eve, Croix also has a voracious sexual appetite, another factor of her personality that she has had to suppress prior to her marriage.

As a princess and a saint, Croix seems to accept her social obligations without the slightest complaint, even if they come at great personal cost. She does not seem to resent either the crown or the church for these restrictions, and seems quite close to her father, Louin.

As a saint, Croix has a particularly high level of spiritual power. Croix in particular has some of the most spiritual power in living memory, perhaps all the way back to Mother Eve herself. To further this power, the Snake Crest arranged for her wedding ritual, as well as for their agent, Bolonius, to have her infected and temporarily killed by the zombie virus so that she could understand her power over souls by becoming one herself. Thanks to this "training," Croix has the potential to be one of the most powerful beings on the planet, but the Snake Crest still had to gather a great deal of "miracle power" for her to make use of these abilities.

Even without this surplus of power, Croix is able to break the Outlaw curse on individuals, a monumental power by any measure.

As a noble, it is possible that Croix has powers "equivalent to a knight," though she has never demonstrated them. If she does have these powers, she could theoretically kill someone under Mother Eve's blessing without becoming an Outlaw, and could marry multiple spouses. 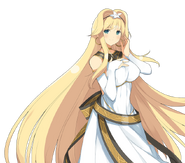 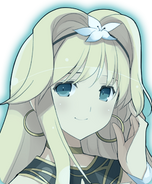 Croix's talksprite as a ghost, from Evenicle.
Add a photo to this gallery
Retrieved from "https://alicesoft.fandom.com/wiki/Croix_Eden?oldid=97759"
Community content is available under CC-BY-SA unless otherwise noted.