Convert Tax is the former second in command of the Helman 2nd Army, working directly under Aristoles Karm. However, he's actually mostly loyal to Stessel Romanov and was put in the 2nd Army to keep an eye on the General Aristoles, who directly opposes Stessel and his investigation to reveal Stessel's acts of corruption could be troublesome. He's pretty greedy and selfish. After the Helman Revolution, he disappeared.

He's not a strong fighter at all, being only level 5 with a low cap of 15, and his appearance is also very laughable, being ugly, short and fat. However, behind his goofy and silly looks hides a cunning and scheming man, being surprisingly good at manipulating others and makes a perfect job of keeping his boss Aristoles in check.

He also has very good skills for his position, boasting Leadership and Management skills. 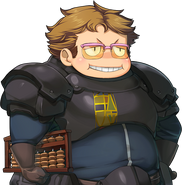