The Church of Eve is an organization in the World of Eve, dedicated to the organized worship of Mother Eve and to her commandments. The church is headquartered in the city of Hamlet, and is technically responsible for its governance, though a council of senators handle its day-to-day affairs.

Worship of Mother Eve is nigh-universal in the World of Eve, at least outside of the Outlaw population. Prayer in a church has the added benefit of relieving a person of their desires, a function that is partially responsible for the lack of mass conflict since the days when Eve herself walked among her children. The church's presence is at its strongest in the Hamlet, Eden and Lancelot regions, and weakest in the El Quixote and Humpty regions (not coincidentally the area administrated by Saint Burst).

In addition to prayer and orthodox matters, the church is also responsible for translating their own holy book, the only-partially-translated Evenicle. Work on the Evenicle is especially slow, partially due to the rambling and sensationalist style of its author.

The church headed by a pope, currently Pope Norshin. It is possible the role of pope is hereditary, as Norshin took over after his father, Pope Seydes, went into hiding after the Arthur Tragedy. The duties of the pope are unclear, though Norshin took on a military role in fighting off the zombie attacks from the town of Osric.

The church appoints several women who exhibit strong spiritual potential to the role of saints. While their spiritual power gives them a greater-than-usual potential for rituals, the church does not know many practical rituals thanks to the partially-translated Evenicle, so saints serve primarily as ambassador and advertisers for the church and for church attendance.

Individual churches are run by nuns, and a head nun seems to be present at nearly every human church on the planet.

The church is also able to designate Holy Knights, who have done the church a special service, though these are not necessarily church operatives, and the title does not seem to carry any additional obligation. 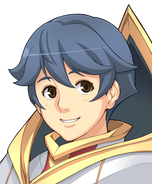 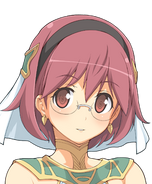 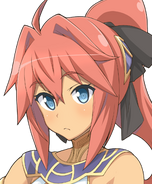 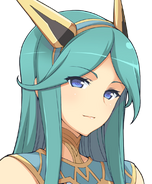 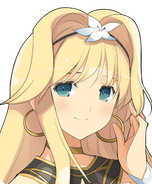 Saint Croix
Add a photo to this gallery
Retrieved from "https://alicesoft.fandom.com/wiki/Church_of_Eve?oldid=97996"
Community content is available under CC-BY-SA unless otherwise noted.