Chizuko Yamada is one of the Four Lords of Zeth, and for a long time the only one to try to live up to the associated responsibilities, as Magic is still finishing up her studies, while Nagi and Papaya simply do not care. As the King is often absent, she is usually the one actually running Zeth and tries to push as much as she can the King's egalitarian agenda, though she is often hampered by the efforts of Zeth's ministers and secretaries.

She is extremely capable both as a magician and a ruler, but her choice of fashion is utterly ridiculous.

Chizuko is an extremely attractive woman, albeit flat chested, with dark blue hair and glasses. She usually wears extremely flashy and garish outfits of her own design.

Unlike the other leaders of Zeth, she is reasonable and hard working with a passion for her job and always trying to do what's best for the country. She is in love with King Gandhi, and wishes to become his new wife now that the previous one passed away. She often reproaches him for his constant adventures however, hoping that he'll eventually decide to stay and help her lead the country. Like the king, she is against Zeth's cruel caste system and is always trying to improve the conditions of 2nd class citizens.

Her apprentice is Annis Sawatari, one of the handful few known magicians in all of Zeth with Magic Lv3. She keeps her eyes on Annis, who can be extremely dangerous when not kept under her constant surveillance.

Chizuko is an expert in Information Magic, a rarely used and difficult form of magic, as only ten talented users are annually discovered in all of Zeth.

She uses this magic to emulate a computer, and process massive amount of data, though even in emulation, the brain of a computer is still necessary and she also relies on the brain of the monster Gates XP, which is also used in Maginot Line defenses.

She claims not to be adept with offensive magic, but has threatened to use Black Destruction Beam once, suggesting a higher level of magic than an average mage.

Her current level is 40 and she has a very high cap of 50 with a Magic Lv1 skill, making her one of the more powerful of Zeth's mages. 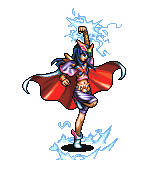