AliceSoftWiki
Register
Don't have an account?
Sign In
Advertisement
in: Articles with Major Spoilers, Characters, Female characters,
and 2 more

Chisa Gode is the daughter of Gaizel Gode, the Mayor of the town of Kathtom from the Free Cities Alliance. Due to her father's fragile health, by the start the events of Rance 02 she had been managing much of the administrative affairs of the town.

Chisa is a polite, sweet, charming young woman who greatly respects and loves her father. She was the first to greet Rance in Kathtom at the beginning of Rance 02 and is pressured for sex from him long after. During the events of the game she's mostly with her father taking care of him and provides information to Rance about the general layout of the town.

Later on Chisa goes missing, making her father panic for fear that she had been kidnapped. Gaizel asks Rance to find her, which leads to her eventual discovery in Ragishss' mansion, upon which she claimed that she wasn't kidnapped at all and returns to her father's side.

Near the end of the game, after Rance defeats the Four Witches of Kathtom, a party is held to celebrate the end of the incident. Chisa offers her body to Rance as a reward, which he joyfully accepts. After a rough session with Rance, Chisa shows an interest in the Phil Rings Rance obtained from the Four Witches; he decides to let her try them on, since they have no effect on non-mages anyway. It is then revealed that Chisa has been possessed by the spirit of the dead magician Ragishss and took the opportunity to steal the Phil Rings and escape, leaving Chisa's body.

After Ragishss was finally defeated by the combined efforts of the Four Witches and Rance, Chisa returned to normal. Her father stepped down as Mayor but Chisa has since continued to aid in the administrative affairs of Kathtom. 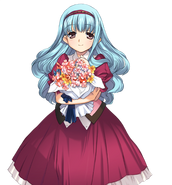 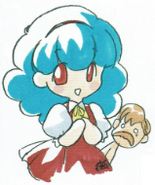