Cessna Benville is a member of Ice Flame, and like much of its members is not a magic user and is therefore part of the mistreated 2nd class citizens of Zeth. Originally a member of the Blue Squad under Abert, when Rance proposed a switch between her and the less attractive Lunch she agreed to joining his green Squad as she found Abert disturbing and his constant smile. She has a strange disorder which causes her to sleep far more than the average person, and she can fall asleep anywhere at any time. While thankfully those naps are usually not too long, they happen extremely frequently.

As she tells it, she has been like this ever since she was a child: her cousin Wayoso Benville, who was fairly adept with magic despite her young age, was casting the "Sleep" spell on her after having just learned it, however a one-in-a-million accident caused the spell to spiral out of control and both her and her cousin were cursed with this sleeping condition for life.

Occasionally her condition is so bad that she takes hour long naps in the middle of the day where absolutely nothing will wake her up, and during some of those instances she was taken advantage of and raped a number of times in her sleep. She has grown quite bitter about people being so cowardly as doing this and then deny having done anything, to the point that she actually appreciated that though Rance took advantage of her as well, he freely admitted doing so when she woke up without hesitation.

Cessna is a cute average sized woman with dark blue hair, a dark blue jacket and protective shirt as well as baggy shorts, and has a lethargic expression even while awake.

Cessna's personality is rarely in display as she manages to stay conscious for only a few minutes at a time, however she is actually a decent judge of people, having an eerie feeling about Abert and pegging Rance as a sex-maniac rather than a cowardly opportunist. While she's not a very expressive girl, the fact that she joined Ice Flame suggests that she was motivated to improve the living conditions of the citizens of Zeth, as well as improving the rights of the 2nd Class Citizens. She's also never displayed any anger or negative emotions towards mages despite her current condition.

Originally only at Level 1, Cessna is not a very experienced fighter and will even end up sleeping on the battlefield. However she is surprisingly strong, wielding a powerful Battle Hammer in battle, and has a somewhat decent level cap of 18, giving her average potential in combat. When she does manage to wake up, her blows can be terrifying and she can instantly whip out deadly attacks without any preparation, however, probably because of her constant sleepiness, her more powerful strikes will miss shockingly often.

Additionally, despite dealing with close quarters combat and thus being in the front lines, she is quite frail and will very quickly be overrun by strong foes if not protected by her allies. 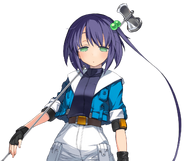