Cecil is a character that appeared in Kichikuou Rance.

In Kichikuou Rance she, along with Louis Quitowack, was a a mercenary that could be hired from Pluepet. Her commanding ability and fighting prowess was superior to Louis', but she was also more expensive to hire.

Cecil is a blunt, serious woman with little interest in men or in having any social interaction with those who hire her. She's very beautiful but she holds no interest in the attraction she inspires and dislikes being regarded as simply a pretty woman.

She's described as anti-social by Pluepet, but at some point she formed a casual friendship with Milli Yorks, whom she respects as a soldier. With her brusque personality, this is her only known friendship.

She has been confirmed to appear in Rance X.

Concept artwork of Cecil from the Rance Quest guide book. 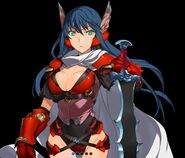