The Caterpillar DX is a type of monster that greatly resembles real-life caterpillar but in a massive size. They are large and heavy creatures that shake the ground while creeping.

They are monsters that tend to inspire great fear in common humans and inexperienced adventurers due to their gruesome and crude appearance. They are grotesque and disgusting, and the spectacle of seeing one die is a very shocking and unpleaseant experience that no-one wishes to see, due to the way it writhes and twists while clinging to die.

Aside from the psychological factor, Caterpillar DX are mid-tier monsters. They have pretty high endurance and a fearsome physical strength, but their speed is very slow. The best tactic to fight them is to focus them down and kill them before giving them a chance to react, but they are stubborn creatures and sometimes a blow that looks good enough to finish off the beast and make the it's killer drop the guard serves only as an opportunity for the Caterpillar DX to strike back in an effort to take his killer down with him. 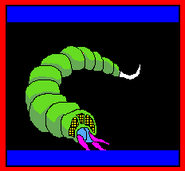 A Caterpillar DX in Rance I.

A Caterpillar DX in Toushin Toshi 2.

A Caterpillar DX in Rance VI and Sengoku Rance. 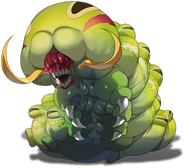 Caterpillar DX in battle in Persiom.