Cat Banchou is a wandering banchou. During the events of Big Bang Age, he accidentally wanders into the castle of the Nightmare Eyes, one of the major powers in Japan, and gets captured. Camilla, the leader of the Nightmare Eyes, wants to kill him, but he repeatedly accidentally dodges her attacks through clumsiness. Fearing for his life, Cat Banchou offers to fight for them, which Camilla accepts.

After attacking Wolf Fang at the castle during their attempt to take the Nightmare Eyes down, Cat Banchou gets captured and is kept in their prison. He refuses to join, unless Rouga brings his favorite brand cat food "Cat! Charge!". Then he joins, albeit reluctantly.

Later on, Cat Banchou receives a challenge from a group that had supposedly been causing havoc in Toukyou's shopping district. Rouga hears about it and wants to go as well, but Cat Banchou refuses as he doesn't want a 'newbie in a man's fight'. Cat Banchou then runs off, but Rouga secretly follows him.

Upon arriving at the location, Cat Banchou runs into his challengers, a group of animals known as the Beast Lords. The group consists of:

After engaging in battle, Cat Banchou is ultimately victorious. However, since Rouga cannot understand the animals' speech, he believes Cat Banchou was beating up innocent animals and decides to punish him with cleaning the bathrooms for a month. The animals make use of this chance to escape, feigning innocence.

After getting beaten up and losing a lot of HP, Cat Banchou wakes up in a strange desert area and hears the voice of a girl speak to him. The girl's pleads with Cat Banchou to remember her, as well as his true form. Cat Banchou is confused and doesn't remember the girl at all. She explains he's actually a prince from a distant kingdom, cursed by a witch to assume a strange cat-like shape. She begins to fade, but tells him his true name before she goes: Tornado. Right at that moment, a desert tornado makes its way over to him and right when it reaches him, he wakes up in Rouga's office. Rouga explains Cat Banchou was beaten up badly and was carried back to Seijou by Rouga. He tells Cat Banchou to get some good rest later and leaves. Cat Banchou stares at the ceiling, in disbelief that everything he just saw was just a dream, but when he opens his paw he finds cherry blossoms there, which he takes as proof everything was real after all.

During the game's ending, Cat Banchou plans to go on a ship to travel to new horizons. However, just before he's about to board he runs into a Hokkaido student. The student was Cat Banchou's errand boy during his time at the Nightmare Eyes and became infamous around town for bringing Cat Banchou fresh fish every day. Because of this he resents Cat Banchou and grabs his sword, ready to kill him. The outcome of the battle is unknown.

Cat Banchou is a small character with off-white skin, two cat-like ears and eyes that look like they were penciled in. He's also got a large parabolic mouth. Curiously, Cat Banchou does not have whiskers. Cat Banchou wears almost no clothes, other than a dark grey coat.

Cat Banchou is a very theatrical character. He often enters and leaves places in dramatic fashion, such as breaking down doors or setting the surrounding area on fire. He frequently imagines fire or light appearing behind him when he announces himself as well. He frequently ends his sentences with 'meow'.

Despite disliking being called a cat, Cat Banchou appears unable to control his cat instincts at times. When Rouga dangles a cat toy in front of Cat Banchou, he cannot help but play with it. Similarly, Cat Banchou is seen loudly chasing a butterfly, despite being perfectly calm moments before. He also loves eating gourmet cat food.

Cat Banchou is a short-range fighter who attacks by approaching his enemies then performing some kind of airborne spinning kick. His special move is "That Hip Twist", a move where Cat Banchou approaches his enemies, bathes them in light and causes them to take damage while Cat Banchou dances. It always hits and reduces the enemy's stamina severely.

As can be seen in his introduction, Cat Banchou appears incredibly lucky, but in unfortunate ways, such as tripping over himself when Camilla attacks him, causing him to dodge her slashes.

Some of Cat Banchou's battle sprites. 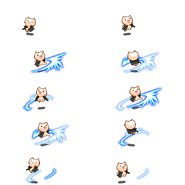 Some of Cat Banchou's battle sprites. 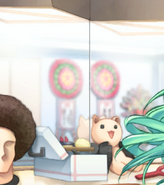