The Can Can is a Monster that belongs to the class of Gal Monsters, notorious for being one of the most harmless species in the world.

Their appearance greatly resembles young human girls with a short green hair and with bunny ears, but wearing nothing but their white underwear. They are always in good spirits and get along well with anyone as they are super friendly to humans or monsters, asking whoever they encounter to play with them. They never fight and are extremely weak, probably weaker than even the average humans, and will never attack another living being even if they themselves are attacked. If this happened they will cry and peacefully ask their aggressors to stop while calling them "bullies" or "meanies". They are instinctively incapable of being aggressive or hostile towards anyone, and are a mostly childish species, very playful and cheerful. They are very optimistic and peaceful creatures that will attempt to befriend anyone they encounter, making them also extremely naive and gullible creatures. Carrots are their favourite food, and they are often seen carrying one with them.

They are an extremely common Gal Monster that is found more or less everywhere. Because of their attractive and lovable looks coupled with how easy it is to capture them, Can Cans are the cheapest and most traded species of Gal Monsters of all. They are also easy targets for Guy Monsters who seek copulation, as abusing of them is an extremely easy task as well. In battle, they lack any fighting ability whatsoever, but they will try to run away after several failure attempts of convicing their pursuers to stop their attack. Since they are so full of energy, their chances of escaping are actually not that low, and their agility is their only good attribute. 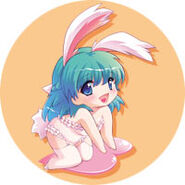 Can Can from Toushin Toshi

Can Can's appearance in Rance 02. 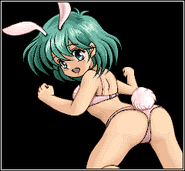 Can Can's appearance in Rance IV.

Can Can's appearance in Rance 5D.

Can Can's appearance in Rance VI.

Can Can's appearance in Rance 4.2.

Can Can child in Galzoo Island. 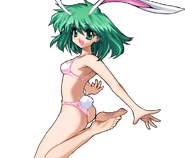 Can Can in battle in Persiom.

A male Can Can from the Ouji-sama game series.

A male Lucky Can Can from the Ouji-sama game series.

Can Can's appearance in Widenyo.

Can Can in Toushin Toshi Girls Gift
Add a photo to this gallery
Retrieved from "https://alicesoft.fandom.com/wiki/Can_Can?oldid=111974"
Community content is available under CC-BY-SA unless otherwise noted.