Café Artful was a member of The Legendary Five, originally joining in their quest because she harbored romantic feelings for British. She was known as "The Priest" and was famous for her unmatched ability in the healing arts, being said that if there was a condition she couldn't heal, then that person would be fated to die.

Travelling around the world the five ventured with the objective of finding a way to break through the invincibility field of the Dark Lords and defeat Demon King Gele. Their quest eventually led them to the Ancient Ruins, about 1500 years before the Rance Series began. Inside they found the largest dungeon in the world and ventured in its depths, going through many battles against humans and monsters, but in the end they found a a monster they had never seen, a failed attempt at creating a God called a Proto-God. After facing probably their most intense enemy yet, the five managed to defeat the creature, but British was fatally wounded as a result. The five started to advance, but British could not move from the place and even Café was unable to heal him. British told the members to go on without him and stayed resting.

The remaining four advanced on and they were immersed in a light and found themselves in the land of Gods, where they met one of the Three Supreme Gods, Planner. The God complimented them for defeating the Proto-God, and finding their way there. As a reward, he would grant one wish to each of them....

The other three expressed their wishes but Café, who harbored romantic affection towards British and lacked self-confidence, secretly wished for "ultimate beauty". The four lost consciousness and they were teleported out of the dungeon, separated from each other. When they woke up, they realized they were no longer human. Their wishes were granted but twisted by Planner's twisted mindset, and they were also granted immortality. The party was disbanded and they were never seen again.

Café's appearance changed drastically, becoming a beautiful woman with a very well rounded and developed body that every man would long for. However, she was unable to find happiness with her ultimate beauty and realized that all the men who desired her wished so out of pure lust, and no one loved her truly. She was imprisoned by a Royal family for three generations for her beauty, and was rescued by a warrior, only to find herself in the same situation under him. Countless battles were fought for her over a period of several centuries and she was used as a political asset for a long time. She eventually broke free created an independent band of mercenaries, formed of girls who suffered a similar fate as hers. She changed her name to Lady, and wanders the world with her mercenary band, who also serve as prostitutes.

During the events of Rance Quest, her curse was lifted with Rance's help and she managed to re-encounter with her old partner Chaos and share a rather close friendship with. She's been able to find happiness after returning to her original body and has been living in the Rance Castle since.

Café as "Lady" in Kichikuou Rance. 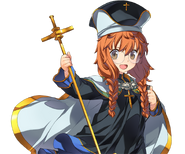