Caesar is a stone Golem Guardian made by Dark Lord Satella with her unique ability to craft golems, and he's also her favorite guardian. He's always at Satella's side and is very protective.

He's absolutely loyal to Satella, and is willing to do anything for her sake. He pushes himself to extremes in order to support her and provide her protection, and is always willing to fight for her regardless who the opponent is, even it was the Demon King. He is also very determined to accomplish goals and desires to kill Rance to avenge Isis.

It is incredibly intelligent, with a unique ego and a subservient personality, and unlike Isis he is capable of fluid verbal communication.  He's incredibly durable, tough and with an amazing vitality and force of will. Satella claims that Caesar is as strong as she is, and is very reliant on his strength, although he doesn't have the invincibility field inherent to Dark Lords. 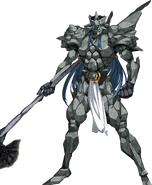 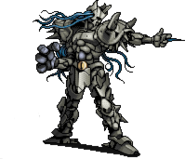 Caesar and Satella from the Alice's Cottage 4/5/6 Guide.