One of Xavier's five apostles. He goes by the name of Rengoku (煉獄), but his true name is Byakko. His original race is unknown but he seems to have been Xavier's Apostle since Nighcisa's era.

He's a large man that carries a pistol. His skin is pale, his ears are long, and he has great physical strength. He is the first apostle to rejoin Xavier after the gourd is broken, and leads the ninja group responsible for gathering the remaining gourds. He remains calmed all the times and performs his duty obediently and throughly. He's probably the most loyal and devoted to Xavier of all his Apostles.

In LP0004, he remained sealed in an unknown individual and breaks free soon after the partial revival of Xavier in the 4th Sengoku Era. He is present during the raid on Honnuji Temple and he is killed attempting to defeat Rance while defending Xavier.

His true form, Byakko, appears to be some sort of creature with horns. He has a white fur and fiercly engages against all his enemies frontally using his horns. His fighting power is very high, requiring a high level party of humans to take him down. 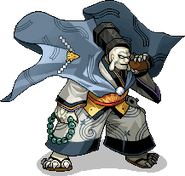