Bitch Golch was an individual from a prestigious family from Helman and one of its most important political figures, being a member of the Council of Eight. Despite this, he only got to this position due to his family's influence, by trickery and cheating. He lacks any type of talent or skills in politics or military at all, and heavily abuses his position. He is cruel and narcissistic, looking down on others and blaming them for his own mistakes.

He was sent by Stessel to secure the Toushin that was there. He was killed by Toushin Upsilon during the operation he led to acquire an ancient super-weapon for Helman in the floating land of Ylapu.

He was married with Rottenmeier Golch, an equally abusive woman that enjoyed torturing girls in her chambers.

Bitch is what one would describe as a total snake of a man. He's sadistic and arrogant, believing himself to be the greatest in the world; he also enjoys torturing or abusing others without any hint of regret. Years ago, he purchased a young Merim Tser to serve as his personal slave. During her service with him she was heavily abused, serving as a sexual and sadism outlet, being whipped and raped countless times for his own amusement - this has left many scars on her body and a submissive attitude towards sex (which surprises even Rance during his first possible sexual encounter with her).

He is a talentless and down-right useless politician. Many see him as the cancer of the council. He is cowardly, mischievous, and lustful with women. His only real skill is being able to come up with dishonorable, yet smart tactics to gain an upperhand against possible threats. He has no concern over his subordinates and uses them as tools to achieve his goals, regardless of their usefulness.

He's very arrogant and narcissistic in all his relations, which ultimately cost him his life after he awakened Toushin Upsilon. Bitch immediately assumed a Master relationship with the Toushin, just because he was the one that re-activated him. This proved to be an instantly fatal mistake.

Bitch has no real skills or talents. He can use Divine Magic but he's far from proficient with it, and carries a low Level Cap of only 11, which he reached.

His greatest skill is coming up with coward and underhanded strategies. He was able to threaten and use the strongest Tousho, Dio Calmis by implanting bombs into his body to force him into submission before his activation.

He was also able to lead, although far from proficiently, a platoon to investigate in the floating landscape of Ylapu, and managed to get the team to the Toushin Casket and re-awaken the Toushin. 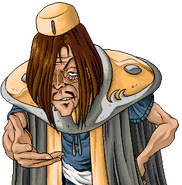