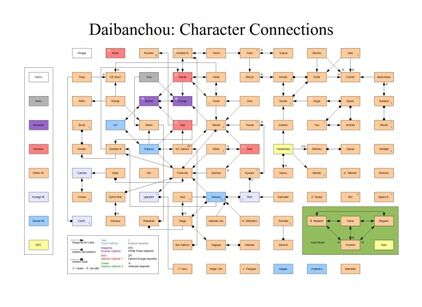 For a detailed explanation of each character's requirements for recruitment and completion, see Character Walkthrough.

Recruitment can also mean survival to the end. For instance, Sparn must leave when clearing Kuga.

Double-sided circles means that two characters are mutually exclusive - if you recruit one, you can't recruit the other. For instance, you must choose either Erika and her gang or the Nakanishi sisters in the School Chapter. It is not possible to have both.

A circle and an arrow can mean a character must leave in order to clear another one, not necessarily that the character cannot be recruited in the first place. For instance, Daimao will cease to be playable when clearing Kaguya.