Barth Barbato was a participant in the Toushin Tournament. During the second round, he participated in the hunt for Craia Kalar, hoping to take Craia's Kalar crystal as a gift to a woman he was seeing, but he was unsuccessful in his attempts to find her. After a particularly brutal victory over an opponent named Closed, Barth was unfortunately paired against murderous cheater, Xavier, for the division finals. Xavier, using the false name Eithel, led Barth to a high cliff in the Ragnard Dungeon, promising him a sort of love potion supposedly hidden there. The moment Barth's back was turned, he was shoved off the cliff and to his death.

After his disqualification from the tournament. Barth's partner, an unknown blonde woman with curly hair, was raped in public by Reine as part of her tournament forfeit. 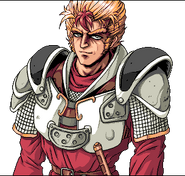