Barres Province is the General of the Leazas Black Corps, the largest unit in the Leazas Army, and the Commander in Chief of the entire Army of the majestic Kingdom of Leazas.

At present he's the oldest soldier in the Leazas Army, being 61 years old by LP0006, and he has served as a soldier for three generations of the Leazas royal family. He's a veteran of great skill and fame that has participated in many wars and battles over his life, and is universally respected by all in Leazas as a war hero.

He's an extremely skilled commander and tactician, and word of his feats and accomplishments have spread over the continent and will likely be a key figure in history books.

He and his wife had a total of eight children together over the years, though it is unknown how many of these are his biological children since he's noted for taking orphans from war under his care as adopting children, Sioux being a good example of this. The vice-commander of the White Corps, Hauren Province is a confirmed biological daughter of him, though their relationship is a bit adverse.

During the events of Rance 03, when the Helman army attacked Leazas, he was put under a hypnosis spell by Apostle Sapphire, which resulted in him being brainwashed and working for the enemy. The great adventurer Rance managed to defeat the architect of the brainwashing spell and Barres returned to normal, proving to be a valuable ally. He became a huge fan of Rance and admired his great skill and talent, allowing him to become the Supreme Commander of the Leazas Liberation Army. Once the battle was over, Barres offered Rance a high ranking position in his army, but the offer was refused.

In Rance X, he serves as the representative for Leazas in the strategic team, as a replacement for Arlcoate, who had been presumably killed at the time. After Arlcoate is saved, he goes to defend Leazas.

Barres is a compassionate and honorable man, with great respect and love for his country. His patriotism is borderline insane, and he's very hard to be himself, without being able to forgive himself if he fails. He's so devoted and his loyalty so intense he's perfectly willing to commit suicide as an apology in the rare instances where he doesn't accomplish his mission, being quickly stopped by his allies and superiors.

He's generally agreeable, and seems relaxed out of battle. He's a great commander, and can issue orders without hassle. He's a great and noble man, philosophical and intelligent. He enjoys playing intellectual games like chess, and prefers to spend his time with quiet and relaxed activities. Despite being in his sixties, he shows an incredible passion and doesn't consider the idea of retiring. He's a stubborn man, he would probably serve in the military until the day he dies.

His hobby is golf, he once invited Rance to come play with him, but Rance refused, stating that tennis is better. Pretty much everyone but Rance respects Barres and think of him highly, even his enemies. Rance usually treats him very poorly and with no respect, since he doesn't like old men, but can tolerate him as a subordinate as long as he's competent. He's very harsh with him and overly abusive with him. However, Barres himself has a deep respect and admiration for Rance and places him on a higher regard than any other person. He's deeply touched and motivated by Rance, and looks up to him for great skills as a leader and as a warrior. He also tends to misunderstand his intentions or actions, believing them to be noble or just.

He's a loving father to eight children. In Rance 03, he adopted Sioux after her village was wiped out by Dark Lord Satella. The two formed a close relationship and she loves him very much despite being only recently adopted by him. All of his children are apparently very close to his father, with the exception of Hauren Province, the second in-command of the Leazas White Corps. Her relationship with Barres is rather poor, since Barres wants Hauren to set down and get married in order to live a more peaceful and quiet life, but Hauren has the heart of a warrior and is angry with her father for not being able to understand her desires. The two argue often and have distanced with each other, but they both still hold love for the other and would quickly rise to defend the other.

Like stated earlier, Barres is an experienced General with an outstanding skill in the art of war. He's smart, resourceful, efficient, and a very charismatic leader. He is a true master of strategy, and his tactical abilities are renowned throughout the land. He has a Lv2 skill in Leadership and a Lv1 skill in Strategy, coupled with his age and experience, makes Barres a fearsome enemy. He's wise, knowledgeable and very sharp in the battlefield, being capable of noticing the opposing commanders strategy and adapt accordingly. Many soldiers are motivated by his name, and he's changed the outcome of countless battles for Leazas' favor over the years.

In battle, he's also proficient with the sword, boasting a Sword Combat Lv1 skill and a Level Cap of 37, with his current Level being 30. While he's a relatively strong fighter and easily above the average soldier, his swordsmanship can't even compare to people like Rick Addison in a 1 on 1 fight. His true strength relies in leading armies in the battlefield and it's been stated that, if it came down to a battle between armies, Barres would be perfectly capable of defeating Rick.

His biggest rival is the General of the 1st Army of the country that opposes Leazas, Helman, the only veteran whose leading abilities rival Barres himself, Lelyukov Berkov. They've been fighting with each other for many years, but neither is able to grasp a victory over the other, and their battles have become iconic and famous throughout the land. This rivalry ended when Lelyukov sadly perished during the Helman Revolution in LP0006, without being able to settle things with their long-life rival.

Barres in battle in Rance 03. 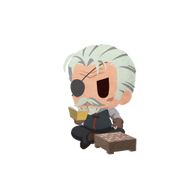 Concept artwork of Barres from the Rance VI guide book.

Barres' appearance in Widenyo.
Add a photo to this gallery