AliceSoftWiki
Register
Don't have an account?
Sign In
Advertisement
in: Articles with Major Spoilers, Characters, Male characters,
and 5 more

Baba Shouen was a terrifying warrior and one of the four great generals of Takeda House.

Prior to the reformation of Takeda House, Shouen was the head of the Baba Family, one of the four most prominent families in the territories that would go on to make up the nation. At some point, the leaders of these four families held a meeting between each other, united by the common goal of bringing peace to the chaotic JAPAN. While all four of them excelled in different areas, they understood that, even if they were to combine their powers, the country could only be completely unified if it had a single leader to follow. This led to the quartet creating the character of Takeda Shingen, a "living god" clad in red who excelled in all areas that the people of JAPAN could look to as a leader, when in reality it was simply the four of them each taking turns in the armor to utilize their own specific talents. Shouen's incredible strength made him don the armor most frequently on the battlefield, as he was the only one of the four who was capable of moving around fluidly when wearing it.

During the events of Sengoku Rance, the forces of Oda House, led by Rance, succeeded in taking Takeda's territory and destroying the nation. As Takeda Castle burned to the ground, the four generals had one final discussion about their next plan of action. Outraged by their failure, Baba believed that the only way for the four to redeem their loss was to launch one final assault on Oda and go out in a blaze of glory. While his comrade Sanada Tourin attempted to persuade him to instead give up and live another day for the sake of JAPAN's future, Shouen refused to listen and called his friend a coward and attacked Rance with his remaining troops without hesitation, resulting in his death.

On additional playthroughs, Rance can gain the option of attempting to assassinate Takeda Shingen prior to destroying Takeda House, which results in him exposing the truth about his identity and forcing the four generals to disband and ally themselves with different houses. Shouen can be fought and captured in battle during this time, allowing him to fight for Oda as a commander. After joining Oda, Shouen becomes fond of Rance's aggressive personality, and the two frequently engage in wrestling matches with each other, which Shouen always wins easily.

He plays a somewhat significant role in Uesugi Kenshin's route, where it is revealed that he is one of the candidates in the emperor's race. If he is not a part of Oda's army when Kenshin challenges him to a duel, Rance will attempt to take advantage of the situation to assassinate him after his loss, but is foiled by Kenshin, who refuses to allow an opponent as strong as him to die in such an underhanded way.

Shouen was a gigantic middle-aged man with a hulking and muscular body. He sported a large orange beard and a receding hairline, both of which ended in several jagged points resembling flames. His clothing consisted of purple and red Takeda armor with massive spikes on each of the pauldrons. Due to his fiery personality, his face was almost always in an intense, ferocious expression with several veins popping out of it. Overall, Shouen was a very intimidating person.

An energetic warrior who lived for battle, Shouen was much more wild and uncontrollable than his three reserved companions. He would often behave recklessly on the battlefield in order to make fights more entertaining for himself, and he would become extremely excited when in the face of a strong opponent. Shouen valued his identity as a warrior above all else, to the point of wanting to throw his life away for the sake of dying as one, and showing utter disgust at the idea of giving up in order to continue living.

Despite his rowdiness, Shouen was still a very noble and respectable man. He showed only admiration for his strongest enemies and was quite courteous when outside of battle. He shared his friends' dream of seeing JAPAN unified into an age of peace and put his complete trust in their abilities to do so.

While there was a great amount of mutual respect between him and his friend Sanada Tourin, they also clashed the most frequently out of the four Takeda generals, with the subtle and methodical strategies created by Tourin going against Shouen's own aggressive and graceless assaults. Their differing ideologies drove them apart during Shouen's final moments, as he declared his friend a coward for wanting to surrender to Oda. Tourin continues to think about Shouen long after achieving their dream of uniting JAPAN, showing how deeply his death affected him.

He was one of the few people in JAPAN who was capable of fighting on equal footing with the Goddess of War Uesugi Kenshin, and the two clashed on the battlefield countless times when their houses were at war. Despite technically being enemies, both shared an immense respect for each other as amazing warriors and had a very friendly rivalry. Rance was notably annoyed when Kenshin mentioned that she deeply admired Shouen's ability as a warrior, stating that she should only have eyes for him, though Kenshin assured him that their relationship was purely a platonic respect for one another.

An astoundingly powerful fighter, Shouen was the strongest warrior in Takeda, one of the strongest warriors in JAPAN and, by extension, one of the strongest people on The Continent. He possessed an excellent Level Cap of 68, giving him a massive amount of potential. In addition, his large and muscular body increased his physical abilities substantially, to a point where his strength bordered on superhuman. He was the only one of the four Takeda generals that was capable of moving around easily while wearing the Takeda Shingen armor, and it was through his amazing fighting ability that Shingen achieved a reputation as an unbeatable warrior.

Shouen was a prodigiously talented spear fighter who fought with a combination of strength and ferocity. His attacks were relentless and brutal, leaving his opponent almost no time to fight back, to the point where he was nearly unbeatable when fought in a duel. In battle, he rode on a pair of Tebasaki, requiring two to support his massive body, allowing him to have a great amount of speed and maneuverability in addition to his ridiculous strength. His great skill as a fighter is best shown when the Dark Lord Xavier conquers Takeda, where he is the only one of Takeda's generals able to hold his own against the demon for a significant amount of time.

When compared to his three companions, Shouen was the least talented at leading an army due to his recklessness. His desire to battle strong opponents often overpowered his skill at commanding, and he would generally rely entirely on all out assaults to destroy his enemies rather than any sort of strategy. Despite this, the skill of Takeda's army, when combined with Shouen's strength, made for a massively destructive force nonetheless. Additionally, like all of the other generals of Takeda, Shouen was capable of using the skill Fuurinkazan, which greatly increased all of the capabilities of his army, making up for his unbalanced commanding abilities. 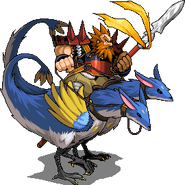 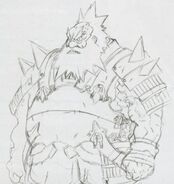