Aten Gnu is a young girl originally born in Zeth. She was claimed to be quite talented in magic in her school days, having skipped several grades and was said to be an active genius. However, she soon grew very lazy and and became unmotivated to do anything. She loves JAPANese comics and magic vision shows, which has led her to grow leisured over time. She only works when she really has to. Actually, she sets up a very complicated labyrinth and harasses the villagers just for them to leave her alone, as she told Rance "I'd go all the lengths and do all the work just to stay lazy".

In Rance Quest she's become a recluse or a hermit. She hates to work and is never motivated to do anything, claiming that "people aren't built for work". She's usually a dark and antisocial girl that doesn't like to be around others. She prefers to just stay at home. She loves comics, movies, shows and the alike. Most of the time she wears a jacket with no pants and just her underwear, since she's always at home anyway and likes to be comfortable.

In Rance 03, Aten proved to be much different. She was in Leazas as a tourist with Julia, who was guiding her in different locations of Leazas. By this time she was much more serious and dedicated to her obligations and was only starting to like comics as a casual hobby. They both later fight in the the army, even though Aten thinks this is troublesome but Julia has decided to add it as part of the tour.

Even though they went through a lot of troubles, Aten admits that she had fun with Julia. She was shocked when she found out that Julia is part of the royal guard of Leazas.

Despite being lazy Aten is actually a very proficient mage. She can use magic of different elements like ice and thunder with efficiency, but she's mostly good with darkness spells. In Rance 01, a newspaper report states she managed to solve a several hundred year mystery and learned an anti-mollusc ice spell only she is capable of utilizing. In Rance 03 she was already good enough to use a powerful skill like the Devil Beam, which is a magical blast of dark energy that destroys all enemies around her. Lia and Julia both recognized how strong Aten was for her age.

She has a magic Lv1 skill and a very high cap of 48. With such a high cap she could become a really powerful mage if she was more motivated to work for it.

She also has a skill level 1 in Hikikomori, which is a Japanese term to refer to reclusive adolescents or adults who withdraw from social life, often seeking extreme degrees of isolation and confinement. She seemed to only started giving real use to the skill after Rance 03 when she began to be attracted to comics and shows.

Aten in battle in Rance 03. 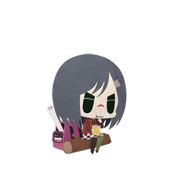 Usually dark and serious, but she does have another face. 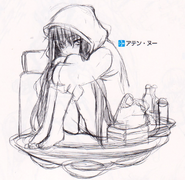