Asterisk, more commonly known as Aster, is the central protagonist of Evenicle. He is a half-human, half-dragon, and is heir to the lost Kingdom of Arthur, being the son of King Tram of Arthur and Queen Ruto of the Witches of the Round Table. Aster has no known surname, though given the naming conventions of other royal families in the World of Eve, it may be "Arthur."

After the Arthur Tragedy, which destroyed his home country, Aster grew up in relative isolation on Fresh Fish Island, raised by his "sisters," the dragon twins Kyou and Kinou. One day, he was driven by his love for cute girls to journey to the Kingdom of Eden, where he became a Knight. Since then, Aster has risen the ranks of the knights to become a Zero Knight, the highest rank possible, as well as to Holy Knight, a Knight with special status within the Church of Eve. At present, he has married ten wives, listed below.

In his first quest, Aster followed the lead of his second wife, Riche Eden, to defeat the Outlaw conspiracy known as the Snake Crest. After completing his journey, he began a greater quest to rid the fractured World of Eve of the legacy of the Archfiend.

As a member of the House of Arthur, Aster has an unknown number of distant relatives. His oldest living relative is QD, who lives with the spirit of her spouse, King Arthur. A number of Aster's maternal, draconic ancestors may also be alive, but in hiding and grieving. Aster's parents, Tram and Ruto, are believed to be dead, but there are some who suspect they may still be alive.

In the current generation, Aster has married ten women in the order that follows.

In addition to these ten, Aster also lives with Tilt, the ghost of his fourth wife, Tio's, sister. Tilt occasionally possesses Tio to carry on a sexual relationship with Aster. Due to Tilt being a ghost, Mother Eve's Blessing does not seem to consider them to be married.

While he and some of his wives have plans to have children, this has been put off until there is no longer any need for them to adventure.

Aster is a jovial, friendly warrior driven primarily of his love for sex and cute girls. This single-mindedness has driven him cross-country and even across dimensions in an effort to to keep girls safe the world over, and has allowed him to face challenges that might have thwarted a more nuanced motivation. His ancestor, QD, believes Aster's driving desire is not actually cute girls (necessarily) but Justice, one of 108 desires she feels exist in the human psyche. She believes this is what allowed him to battle the manifestation of Desire at the end of his first adventure.

Aster believes he loves all cute girls equally, and generally puts this into practice, being full of praise for every possible human personality, profession and appearance. His relationship varies with each of his wives, but he loves them all deeply and with an open, unbridled enthusiasm that some of them (such as Kathryn Lapucelle) find occasionally uncomfortable.

Having grown up on Fresh Fish Island, Aster also has a love of fishing and of anyone who fishes, and is especially supportive of anyone who might have difficulty with their career, such as the elderly populace of the island.

In terms of appearance, Aster dresses in light armour to suit his fighting style. This casual style has helped him retain his anonymity, as no casual onlooker would recognize him as the hero who saved the world numerous times.

As a Zero Knight, Aster is among the most powerful warriors in the World of Eve, having already defeated other Zero Knights such as Acheval and Millet, as well as even greater threats. His title comes with the ability to kill other people under Mother Eve's Blessing without becoming an Outlaw, as well as the right to marry up to ten people, as he has done. Aster is also a Holy Knight of the Church of Eve, and the combination of Zero and Holy Knight has given him the right to participate in a certain church ritual involving the Saints.

While not formally trained, Riche compared Aster's fighting style to a class known as a Magic Knight. Aster is able to intermix complex swordplay with Electric magic, and is the only one in his family to be able to use both with any serious ability. Ironically for someone with such a love of women (and someone with so much in common with a certain other protagonist), Aster has no abilities related to Gal Monsters.

Thanks to his draconic background and a diet provided by his "sisters" Kyou and Kinou, Aster has impeccable stamina. With the help of QD, Aster has learned several of his latent draconic abilities, such as the ability to teleport (albeit only in a limited fashion). From his ancestor Arthur, Aster has also learned how to read the minds of others who are willing to volunteer the information.

Aster was raised in the kingdom of Arthur by his parents, King Tram and Queen Ruto. One day, the Arthur Incident struck, and Aster was ordered to evacuate along with other citizens of the country. Purportedly, Aster attempted to fight the enemies at the gate, and Queen Ruto struck Aster on the head, accidentally causing his memories to be wiped out. He was then given to the two youngest Witches of the Round Table, twins Kyou and Kinou, who hid him away on Fresh Fish Island.

In the course of Riche's investigation, Aster and his family travelled to all the kingdoms of the World of Eve, and were able to defeat the Snake Crest. However, they also learned of the threat of the decaying Archfiend Adan, and that their world was only a fragment of the original world created at the dawn of time, and they resolved to journey to the other worlds in hopes of reuniting the worlds into their original whole. While Aster has left his original world, his legend lives on, especially with the efforts of his wife, Towa. 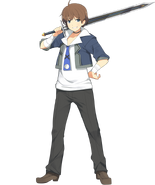 Concept artwork of Asterisk from the Evenicle manual.
Add a photo to this gallery