King Arthur was the leader of a pilgrimage of humans who travelled from the northern continent (in the region now known as the Central Empire) to the southern continent in search of an ideal homeland for humanity. They eventually found their destination in the land now known as the Kingdom of Eden, but left many splinter groups in their path, which now form the human nations of the present day. Arthur became the leader of one of these splinters, which dubbed thesmelves the Kingdom of Arthur. Among many other famous feats, Arthur is known for making peace between humanity and the dragons, and even married their leader, QD.

Much of Arthur's true history has been lost to time, propagnda, and even fuzzy memory on the part of Arthur and QD themselves. Arthur and QD do not even remember Arthur's original gender, although he now exists primarily as a man. Arthur and QD's descendants became the royal house of the Kingdom of Arthur, which eventually lead to their most recent descendant, Aster.

Despite leading humanity to a bright future, Arthur's pilgrimage cost the lives of more humans than any other endeavour in history. Having long since died, Arthur is now being punished for these deaths in a perhaps-neverending purgatory in the castle of Camelot, where he exists as a ghost with his still-living wife.

In life, Arthur was a courageous and bold leader, willing to face the monsters, dragons and climates of the World of Eve like no one in history. In death, he seems to have become quite bored, or at least mellow and accepting of his eternal punishments. He has an interest in his wife's antics, but only tolerates them to a certain degree, and recognizes that the rest of the world probably will not. Arthur has (or had) an interest in experimenting with his gender, and gave birth to several of his children as a woman.

Arthur has short, dark hair and is sometimes depicted in armour in Towa's stories, though this could be an embellishment. He is usually seen with a sword and a shield, both as a ghost and in many of Towa's stories.

As a ghost, Arthur now has very few abilities, and is restricted to his prison inside of Camelot. In life, however, Arthur was one of humanity's greatest heroes. Comparisons have been made with his descendant, Aster, but particulars are unknown. Arthur was presumably a master negotiator, as he managed to convince QD to hand over essentially the entire planet to humanity, but also felt that he was not the kind of person who should govern a nation, and was only put in charge of the Kingdom of Arthur at the insistance of the people.

Arthur was one of the few people to ever possess the "Memory Share" skill, and was later coersed into passing it on to his descendent, Aster. This skill allowed him to experience the memories of anyone willing to volunteer the information. 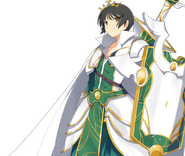 Arthur's Portrait from Evenicle.
Add a photo to this gallery
Retrieved from "https://alicesoft.fandom.com/wiki/Arthur_(Evenicle)?oldid=98326"
Community content is available under CC-BY-SA unless otherwise noted.