AliceSoftWiki
Register
Don't have an account?
Sign In
Advertisement
in: Articles with Minor Spoilers, Level Cap Reached, Articles needing a Quote,
and 6 more

Arms Arc is a strong monster hunter that lives from hunting high level monsters. She's a very beautiful woman with a very matured and developed body but she's not feminine at all and only enjoys hunting and fighting, which is why some refer to her as a "wasted beauty". She's not affiliated to any country and mostly travels around The Continent searching for strong monsters to take down.

She likes strong men and is always thrilled to fight strong monsters. She likes Rance because he's a strong swordsman and a very competent adventurer. She made her first appearance in Rance Quest.

She doesn't like femininity at all and she's quite tomboyish and tough. She's quite a heavy drinker and has beaten Rance in a drinking competition (although that's not that much of an achievement, since Rance is known for not being able to drink a lot). She also beat Rance once in an arm-wrestling match.

Bird had a crush on her but she never paid him any attention.

Arms is an extremely competent fighter with the Lv2 spear combat skill and wields a huge lance in combat, which she's very proficient with. She is arguably the best spear user in the world. She has reached her level cap of 44, making her a top tier combatant, probably one of the strongest female humans in the world.

She has a vast knowledge of the ecology and behavior of various monsters and has quite some experience under her belt from fighting all across the continent. She makes the most of her opponents' weaknesses to gain the upper hand in battle. This allows her to easily overcome most monster threats. In Rance Quest, her knowledge of monster species allows her to deal three times more damage to them. 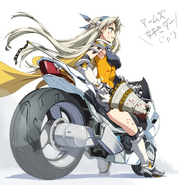 Arms Arc in an official art released in the Alice Soft blog.

An Arms picture from the c82 Alicesoft collection, drawn by Takkun.

Arms hanging in a very awkward position with Rance.